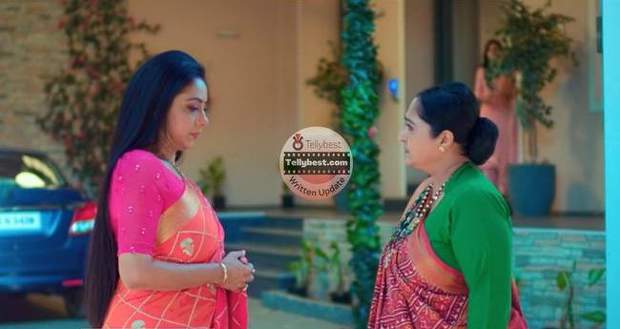 Both of them look at each other but do not utter any words as they remember what they said earlier in front of the family.

Kavya feels offended on thinking about Vanraj’s insulting words about her modeling work while Vanraj feels sad as he remembers Kavya rejecting to help Toshu.

Kavya tells Vanraj that whatever he did today was wrong and that if he thinks she will leave her modeling because of his comments, he is thinking incorrectly.

Anuj and Anupama are sesame and jaggery

The next morning, Anuj comes to Anupama in the kitchen and asks her if he can help her in any way in preparing the treats for Makar Sankranti.

Anupama says that Anuj can rest as she will manage everything nicely on her own.

Still, Anuj stands by Anupama’s side and compliments her for the delicious delicacies that she is making for all of them.

Anupama says that white sesame and jaggery are so different in composition but make an unbeatable taste when they come together.

Anuj replies that they are just like them who, although different in personalities, complete each other when together.

Anupama and Anuj get a bit romantic as they make the food items together in the kitchen and hug each other enjoying their little love session.

Meanwhile, Pakhi comes to the Shah house along with a recipe that she cooked by looking at youtube and relays greetings from Adhik’s side who had to leave because of an important meeting.

Kavya comes to the living room and tells everyone that she has got free passes for a Makar Sankranti event the next day and wants everyone to join.

Everyone agrees to be ready so they can join on time while Toshu asks if big businessmen will be present.

Samar asks Toshu to control himself as they do not want any more trouble while Kavya says goodbye to everyone.

Vanraj asks her where she is going to which Kavya replies that she has a shoot that day and it does not matter if there is Makar Sankranti or anything.

Hasmukh asks Kavya to leave comfortably as work is work and it cannot be compromised.

Kavya says that her director, Mohit, and her hair stylist, Neha have arrived to pick her up and leave to join them.

Vanraj watches Kavya and Mohit getting cozy with each other and glares at them from inside the house.

At the same time, Anuj and Anupama take Anu to a small kite shopkeeper while Anu asks why they are not going to a big shop.

Anupama and Anuj explain to Anu that they should help small vendors in their business by buying their things so that they can also happily enjoy the festivals.

Someone is shown recording Anuj, Anupama, and Anu from a distance on their phone.

On the other hand, Kavya brings Mohit inside to meet everyone and introduces him as her work friend.

Mohit greets everyone and notices Vanraj’s glare at him and tells him that a little touching and hugging are common in their profession.

Coming back, Anu complains about not being able to buy the dress she wanted after which Anupama promises to make it for her but it will need some time.

Anuj tells Anupama that he quickly wants to legally adopt Anu as they are just Anu's foster parents for now.

After Anu and Dimple go inside to decorate the kites, Barkha and Ankush enter the house while arguing with each other.

Barkha tells Ankush that enough is enough and she will not remain silent about that matter anymore which confuses Anuj and Anupama.

Despite Ankush asking Barkha to stop, Barkha says that she will not allow him to bring “him” to that house.

Anuj asks Barkha and Ankush about whom they are talking, to which Barkha answers that she is talking about Ankush’s illegitimate son.

Anuj and Anuj get shocked to hear Barkha while the same person continues to record everything on their phone.