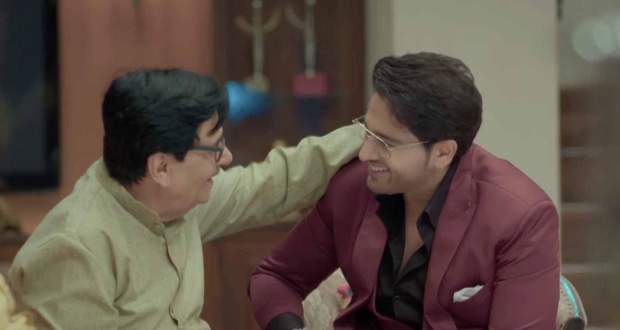 Today's Anupama 19th July 2022 episode starts with Anuj and Anupama discussing that Toshu and Kinjal were right in their place to worry about Anupama’s multiple responsibilities.

He sees some papers in Anupama’s hands and picks them up to see a family drawing made by little Anu.

Later on, when Pakhi and Adhik are discussing little Anu, Adhik says that now Anupama’s attention will divert from them to her new child.

At that time, Vanraj enters the room and says that he doesn’t like Pakhi talking to Adhik on the phone or texting him.

Anuj struggles to pick up little Anu and this makes Anupama smile.

In the Shah house, Kavya is looking at her and giggling at little Anu’s videos.

She says to Vanraj that kids bring parents closer and that they should also adopt a baby of their own, which worries Vanraj.

While Kinjal is sleeping, she has a bad dream and starts mumbling in her dream.

She is worried about her baby and wants Anupama to help her in taking care of the coming child.

The next day, Anupama wakes up and is not able to find little Anu anywhere in the house and she starts worrying.

However, Anuj and Anupama later end up finding little Anu watering the plants in the garden.

She apologises for scaring Anupama like this and says that she took a bath on her own in the morning today, which makes Anupama proud.

She says that everyone in the ashram knew how to do everything on their own.

Anupama says that little Anu doesn’t need to do anything here and she’ll handle everything for her.

Anupama takes little Anu for a cup of hot chocolate after she changes her clothes.

Kavya says how after little Anu’s arrival, everything is going so well.

When Kinjal says that she’ll go with Anupama for her doctor’s appointment today, Vanraj questions if Anupama would be able to take out time for Kinjal.

In the Kapadia house, Sara and little Anu make hot chocolate with Anupama in the kitchen.

Sara realises that even after having everything they complain a lot but little Anu does not complain ever.

They realise that people value things only when they don’t have them.

Anupama says that today they also need to go to a school for little Anu’s admission.

Meanwhile, Adhik asks Barkha to behave well with the kid and let him execute his plan.

© Copyright tellybest.com, 2022, 2023. All Rights Reserved. Unauthorized use and/or duplication of any material from tellybest.com without written permission is strictly prohibited.
Cached Saved on: Monday 21st of November 2022 06:33:40 PMCached Disp on: Monday 5th of December 2022 02:15:55 PM