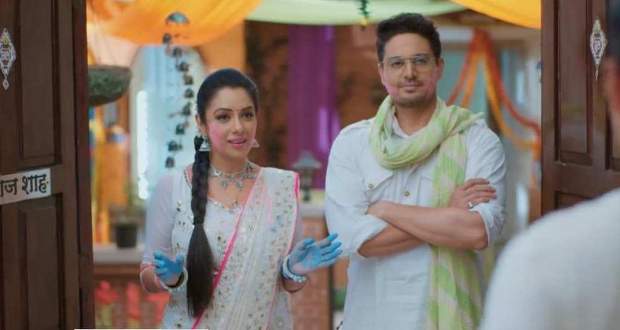 Today's Anupama 19th March 2022 episode starts with the Shah family discussing the fun they had at the Holi festival.

Suddenly, Anuj shouts “gaowaalo!” (villagers) from a distance gaining attention from Anupama and others who rush to see the matter.

As they reach the spot, they see Anuj standing on a water truck, fully drunk on “bhang”.

Anupama, at once, asks Anuj to come down from there but Anuj denies obeying her.

Instead, he announces that he is gravely in love with Anupama for 26 years and will continue to love her till eternity.

Hearing this, the Shah family gets shocked while the neighborhood people whisper comments on Anuj’s confession.

Anupama remains silent and repeatedly asks Anuj to come down but he requests Anupama that he has to declare one more thing.

Distracted by the words of others, Anuj’s attention falls on Vanraj making him mock Vanraj in the funniest way.

After getting a warning from Anupama, Anuj hurries over his words and finally declares that he and Anupama are going to marry each other soon.

The people present start questioning the character of Anupama as a grandmother who is thinking about marriage at that age.

As promised to Anupama, Anuj climbs down the ladder of the truck but slips his footing making him crash on a pile of rags kept underneath.

Anupama thanks God for saving Anuj’s life while Leela gives a dirty glare at Anupama and Anuj.

Later, inside the house, Anuj tells everyone how he wants to live a happily married life with Anupama and comments on everyone’s personality traits.