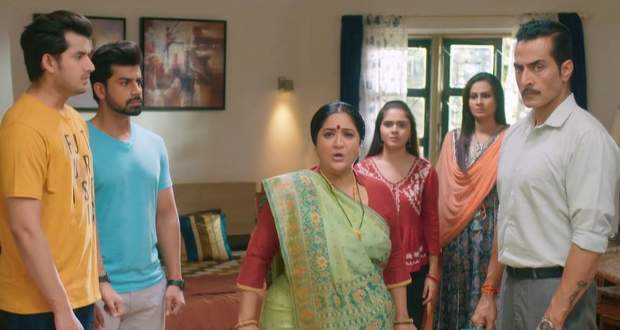 Today's Anupama 19 May 2021 episode starts with Anupama reading her files and asks Advait if it is curable.

He replies yes and she tells him to not inform her family about it while Advait gets impressed by her positivity.

Meanwhile, Vanraj tells Kavya to leave and blames Anupama for all the drama.

Vanraj argues with Samar for defending Anupama and he leaves saying that he is going to Anupama.

However, Anupama convinces Samar to go back to the family.

Elsewhere, Vanraj scolds Kavya while she says that Anupama has already moved on when they hear Anupama and Advait laughing.

The next morning, Anupama happily does Aarti of Sun and does the same at the Shah's cottage too.

However, Kavya tells her that she will do it from the next day and Anupama agrees.

She goes to her room and wears the chain that Devika had gifted her and makes tea for herself.

© Copyright tellybest.com, 2020, 2021. All Rights Reserved. Unauthorized use and/or duplication of any material from tellybest.com without written permission is strictly prohibited.
Cached Saved on: Monday 17th of January 2022 09:44:13 AM