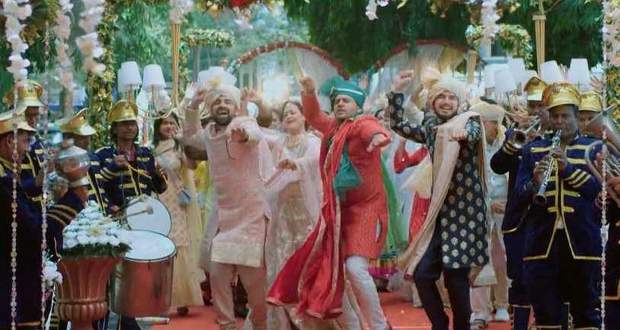 Today's Anupama 19th May 2022 episode starts with Anupama and Anuj standing together for the garland exchange.

However, Anupama reassuringly wipes his tears saying that his dreams are finally becoming a reality.

Later, Pakhi is seeing comments for #MaAn while Devika and Paritosh get happy seeing the support the Anupama and Anuj are getting.

However, they see a few hate comments directed to Leela and Vanraj which ruins their happy environment.

Elsewhere, Vanraj feels restless and says that he knows he has to accept Anupama and Anuj thinking that it is Kavya.

However, he turns around and gets surprised to see Anupama and his son, Samar.

However, Samar says that he was just there to take the coconut for the ritual and leaves without talking to him.

Back to the wedding, Anupama tells Samar to bring Hasmukh's medicines while Rakhi and Leela tell them to complete the wedding rituals immediately as they cannot wait any longer.

The gents of the family go to the corner and talk about a special ritual and how they must convince others to do it.

Later, the kids announce that it is the time for the 'Kaha Suni' ritual and says that the groom and the bride's family will taunt each other by using Shayri.

The Shayri ritual progresses with light fun and starts being more serious while Anupama and Anuj stop them to not cause more argument.

The families start asking who's the winner while Anupama says that both the sides are winners as they have mothers in them.

Leela and Anupama's mother feel guilty for they didn't.

Devika happily says that now it is time for the vows, Phera's, and others.