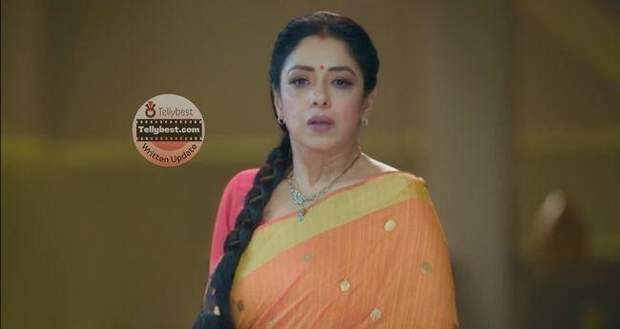 Today's Anupama 19th November 2022 episode starts with Anuj, Anupama, and Anu going on a drive so that they can drop Anu at her camp and spend some time together.

Anuj asks Anupama and Anu whether he should take the shortcut or go through the main road to reach the destination.

Anupama suggests taking the main road but Anuj and Anu vote for the shortcut and decide to take that as the route.

As Anuj enters the car into a narrow and isolated lane, he tries to play music but the music gets eerie with many songs playing together at the same time.

A sad song starts to play making the atmosphere gloomy, which instills an uneasiness in Anupama.

Anu asks about the meaning of “bichraan” (separation) after hearing it in the song making Anuj and Anupama go silent.

Meanwhile, Adhik and Pakhi go somewhere by auto while Adhik attempts to know where they are going.

As the car drives over a big pothole, the charm hung at the front drops and breaks, increasing Anupama’s tension.

However, Anuj, Anupama, and Anu reach the camp safe and sound and meet the teacher to hand over Anu to her.

Before letting go of Anu, Anuj and Anupama share a warm hug with her and ask her to enjoy loads with her friends.

Anu also asks Anuj and Anupama to enjoy their trip and not bore each other with some serious adult talk.

Anu returns to Anuj and Anupama once again and asks them if they will return to get her back from the camp.

Anuj and Anupama feel bad about hearing such a thing and assure Anu that they will be there to get her back on time.

After Anu goes inside the camp with her teacher, Anuj and Anupama turn around and start to leave but Anupama’s saree gets stuck to the gate.

Anuj releases the saree and places Anupama in her seat and plays some music to set the mood for their trip.

Meanwhile, Kinjal and Kavya call everyone in the family outside after seeing someone outside the house.

Vanraj, Leela, and all others come outside and spot Pakhi and Adhik standing at the gate with their luggage.

Vanraj tries to get them inside the house but Leela stops him and asks Pakhi if she has come to her right mind yet.

Leela announces that she will not allow Pakhi inside her house to which Pakhi replies that she is not there to stay with them.

As Pakhi shows a key chain to Samar, he recognizes it as the keys to Nandini’s house.

Pakhi declares that she is now their neighbor and enters her house with Adhik while giving off a smug face to the Shahs.

At the same time, Anuj and Anupama encounter a car standing in the middle of the road and blow horns asking it to get out of the way.

Anupama gets scared and asks Anuj to be careful when suddenly the car starts to come toward them in reverse.

Anuj also reverses his car but reaches a dead end while the other car continues to come at their car at a fast speed.

Anupama and Anuj crouch down in fear of seeing the car crash with them.

© Copyright tellybest.com, 2022, 2023. All Rights Reserved. Unauthorized use and/or duplication of any material from tellybest.com without written permission is strictly prohibited.
Cached Saved on: Monday 21st of November 2022 01:32:22 AMCached Disp on: Monday 5th of December 2022 12:36:39 AM