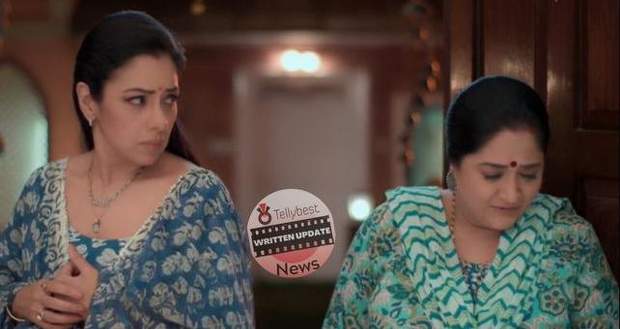 As he doesn’t get any answer Vanraj assumes that Barkha could be the reason for Leela’s condition.

Meanwhile, in the room, tensed Hasmukh cries looking at Leela who is in bed unconscious. He pleads her to speak as she doesn’t look good when she is silent.

Back in the hall Anuj calls Anupama to inquire about the situation in the Shah house and asks Anupama if she is alright.

Anupama tells Anuj about Leela’s condition and Anuj tells her that he is about to leave for the Shah house.

As the call ends Anupama sits on the chair and spots Adhik in the hall.

She pleads with him to leave but he refuses and demands to have a conversation with Vanraj.

While Adhik explains to Anupama that he hasn’t crossed any limits with Pakhi, Vanraj overhears their conversation and slaps Adhik.

Anupama tries to stop him but Vanraj strangles Adhik.

Anupama closes her eyes and as she opens them she realizes it was a dream and breathes a sigh of relief.

After a while, Anuj along with Barkha and Ankush reaches the Shah house to check up on Leela’s condition.

Leela opens her eyes and everybody breathes a sigh of relief except Pakhi.

Leela gets flashbacks of whatever happened back in the resort and starts crying.

Vanraj once again blames Barkha but Kavya denies his allegations.

Vanraj asks if Pakhi did something and Kavya reveals everything about Pakhi and Adhik staying in the same room of the resort where the ladies went to celebrate Rakhi’s birthday.

Land slides under Vanraj’s feet and he becomes unable to handle himself.

Pakhi starts apologizing and justifying her actions but numb Vanraj doesn’t react at all.

After apologizing for a while Pakhi once again announces that she has decided to marry Adhik even if her family doesn’t approve of her decision.

Vanraj pulls her aside and asks who taught her to backstab her parents this ruthlessly.

Pakhi apologizes once again and claims she hasn’t crossed any limits with Adhik and hasn’t done anything wrong.

Enraged Vanraj decides to punish them, especially Adhik. Anupama stops Vanraj saying Adhik is not the only one at fault here and Pakhi deserves the same treatment as him.

Leela once again starts crying and says that the deeds done by Pakhi and Adhik cannot be undone and the only option left is to marry them so they could save their reputation.

© Copyright tellybest.com, 2022, 2023. All Rights Reserved. Unauthorized use and/or duplication of any material from tellybest.com without written permission is strictly prohibited.
Cached Saved on: Monday 21st of November 2022 02:13:21 AMCached Disp on: Thursday 1st of December 2022 01:20:52 AM