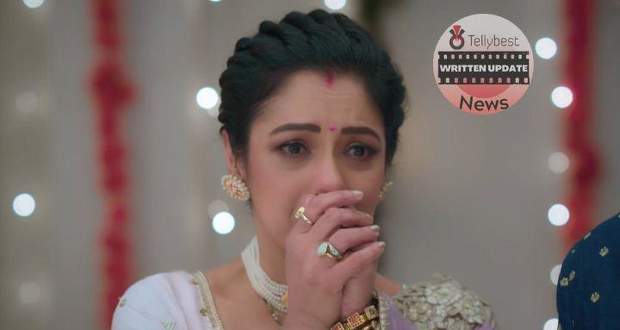 Today's Anupama 19th September 2022 episode starts with Anuj coming to console Anupama and saying that whatever she did is right as these types of issues are needed to discuss amongst all the family.

Further, he says that these kinds of deeds are done behind closed doors, and it is necessary to bring these issues to discuss.

Leela shows her anger for Anupama to Hasmukh and says that Anupama has destroyed her son’s life as well as her grandson’s life too, to which Hasmukh completely denies and accuses Leela of thinking wrong about Anupama as whatever she did is completely giving justice to the deed.

Vanraj asks Anuj and Anupama to go to their home and says that they will care for Kinjal and Arya.

Later, Anuj tells Vanraj to make Leela understand as he can't tolerate taunts and curses given to Anupama.

Anuj asks Anupama to stay here as Kinjal will need her the most in her tough time.

Anupama talks about her sorrow to Hasmukh and complains about the battles she is fighting.

However, Hasmukh tries to explain to Anupama about the various responsibilities a woman takes up with the passing age and advises her to speak her heart out.

Meanwhile, Kinjal goes through images of her happy moments on her phone after Arya’s birth and realizes that even the morning mist doesn't disappear so soon as soon her happiness has vanished from her life.

She considers all the promises and vows of Paritosh as complete lies and panics realizing the betrayal she faced from Paritosh.

Kavya sees Kinjal in a distraught state and rushes to Anupama for help.

Kinjal gets a panic attack shouting and crying and claims love is fake because if love is true then Paritosh would not have betrayed her.

However, Anupama tries to calm her by hugging her tightly whereas Kavya takes Arya and cries telling her about Kinjal’s condition.

Anupama makes Kinjal sleep in her lap and tells her about the battle she has to fight as a mother and the journey she needs to walk alone through hardships and struggles. She comes to take Arya whereas everyone is worried about Kinjal’s condition.

Anupama informs about Kinjal’s state of mind which will take time to accept the harsh reality.

Vanraj prays for Kinjal and expresses his concern about Paritosh who has just adapted his mistakes.

Kavya feels guilty realizing and recalling their past as they have hurt Anupama.

At the same time, Anupama is seen cradling Arya and resembles her own past betrayal with Kinjal’s current situation.

© Copyright tellybest.com, 2020, 2021. All Rights Reserved. Unauthorized use and/or duplication of any material from tellybest.com without written permission is strictly prohibited.
Cached Saved on: Saturday 1st of October 2022 11:19:56 PMCached Disp on: Monday 3rd of October 2022 07:23:48 PM