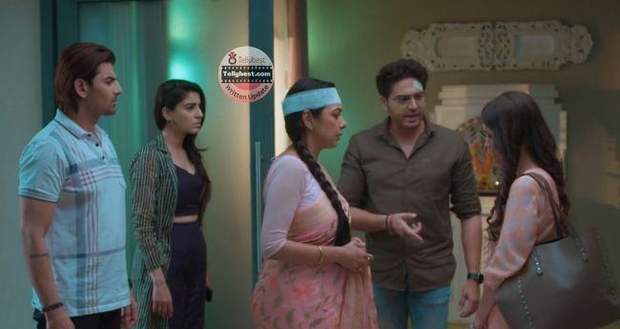 Today's Anupama 1st December 2022 episode starts with Dimple entering the room with Anupama and Anuj while the police officer asks her if she's ready.

Dimple holds Anupama's hand and Anupama squeezes it back to show Dimple her support.

Meanwhile, at the Shah house, Hasmukh plays with Pari while telling Leela to call and check up on Pakhi.

Leela gets hesitant as she says that she does want to go there and gets insulted.

Just then, Paritosh comes there to take the file that Kinjal had forgotten while Leela once again tries to convince him to leave the job.

Paritosh refuses to say that he is working with Kinjal to make things right and that he does not care about society's views.

The guy smirks at Dimple while telling her to think carefully before speaking anything.

Elsewhere, Pakhi orders an expensive coffee while Adhik gets angry seeing the bill as he tells Pakhi that she could have made it at home.

However, Pakhi angrily throws away the coffee as she tells Adhik that she wants to be a housewife and does not want to study or work.

Pakhi leaves there angrily while Adhik sighs in disappointment and cleans the mess that Pakhi made.

Meanwhile, at the police station, Dimple slaps the main man who had taken advantage of her and even kicks him while other guys look on in shock.

One guy tells the police that this is wrong while the police officer shuts him up saying that it is self-defense.

Afterward, Dimple comes out of the police station feeling free while Anupama and Anuj see her and feel happy.

Samar tells Leela and Hasmukh about the bravery that Dimple showed at the police station and praises her while Leela says that Dimple should find another place for herself.

Hasmukh tells Leela to not be so negative and that Dimple herself would want to leave as she is just like Anupama and would not want to be a burden on anyone.

Meanwhile, at the Kapadia house, the family is having dinner while Anu asks Dimple if she can teach her to fight too.

Dimple laughs as she tells Anu that she would have but she has to leave now.

However, Anupama, Anuj, Ankush, and Barkha manage to convince her to stay with them till the trial ends telling her that she would be happy and away from the media while being with supportive people like them.

Anupama further lightens the atmosphere by telling Dimple that she will work as her manager at the dance studio and tells her to get ready.

Dimple goes to her room and clicks a polarized selfie to capture the moment while writing "New Beginning Day" with a smile next to it.

She thinks that she knows she can never repay the Kapadia family for what they have done but can take their support to start a new life.

On the other hand, Anupama tries to talk to Anuj but Anuj tells her to stay silent and admires her without any words.

© Copyright tellybest.com, 2022, 2023. All Rights Reserved. Unauthorized use and/or duplication of any material from tellybest.com without written permission is strictly prohibited.
Cached Saved on: Wednesday 25th of January 2023 10:06:50 AMCached Disp on: Sunday 5th of February 2023 03:42:35 AM