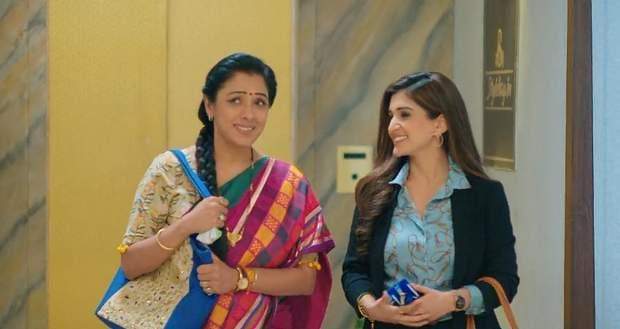 Anupama and Kinjal make breakfast and interact while Kinjal corrects Anupama's English which makes Anupama happy and she says that everyone should be ready for an update and motivates herself.

Kinjal asks her if Vanraj gave any response to the divorce papers while Anupama says that he might be busy with his job.

Elsewhere, Vanraj gets a call from Dholakia and is told that he has to come to the office for settling the dues while Kavya informs him that it is Kinjal's joining day.

Meanwhile, Kinjal requests Anupama to come with her the office to drop her while Kinjal reveals that she has hired Jhilmil for full time which initiates a fight between her and Leela.

Vanraj and Kavya reach the office and he gets angry at the security for telling him to make an entry in the register.

Later, Anupama and Kinjal enter her office while Kavya gets tenses seeing them.

They enter her cabin while Anupama gets very happy seeing the big cabin while Vanraj decides to check his cabin to check if he forgot something.