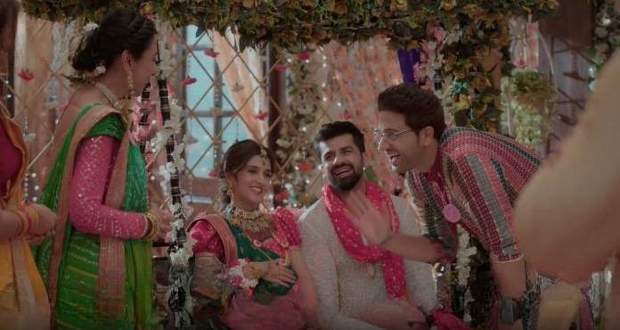 Today's Anupama 1st July 2022 episode starts with Anupama saying that both she and Rakhi have equal rights to the baby and tells Rakhi to go first.

Further, Rakhi tattles into Kinjal's ear while Leela starts an argument and creates a scene.

Anupama mocks both of them and tells them to continue their argument as that is more important than the baby shower.

Both Leela and Rakhi apologize to everyone and each other after which the baby shower once again continues.

Anuj again does Shayri and tells the family to be wary of Anupama's anger to lighten the situation.

Barkha and Ankush also give their blessings and gift an expensive jewelry piece to Kinjal.

Dolly also gives her blessings and hands them the fixed deposit papers for the baby.

However, when it is Pakhi's time to give the blessings, she gets emotional while the others try to cheer her up.

After Samar comes forward for the next ceremony and Anupama gives a speech on the importance of a relationship between a Bhabhi and Devar.

Kinjal emotionally tells Samar that he helped her through all of her tough times and thanks to him for becoming the brother she always wanted.

Paritosh also reveals how Samar is the one who made him realize his responsibilities as a father when Kinjal announced her pregnancy.

Samar gets emotional from all the praises and cries to Anupama while Ankush tells Anuj that he feels the same but cannot talk emotionally like the Shah family.

Pakhi tries to connect with Vanraj on video call as the next ritual is for the grandparents of the child but the video doesn't connect.

Anuj suggests that he and Anupama do the ritual twice in place of Vanraj and Kavya.

Further, Anuj and Anupama act like Vanraj and Kavya to create a lively atmosphere while Leela thanks them for handling everything in Vanraj's absence.

Afterward, Anuj and Anupama do their part of the ritual while Pakhi manages to retain some memory on her phone and records them.

Further, Anupama's words make even Rakhi emotional while Barkha gets a call and goes outside to attend to it.

Meanwhile, Anupama goes to get a pillow for Kinjal while Anuj comes there to flirt with her as a part of his revenge for the previous night.

© Copyright tellybest.com, 2022, 2023. All Rights Reserved. Unauthorized use and/or duplication of any material from tellybest.com without written permission is strictly prohibited.
Cached Saved on: Friday 27th of January 2023 01:47:12 PMCached Disp on: Sunday 5th of February 2023 01:01:30 PM