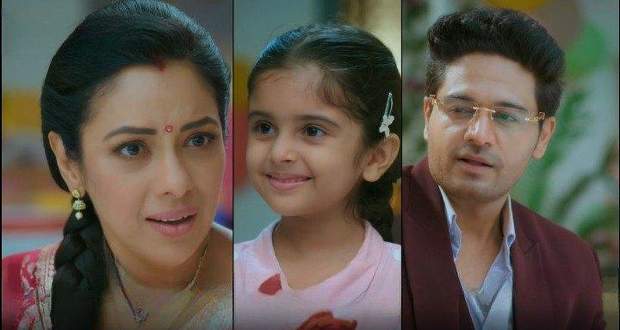 Later, Anuj introduces Anupama to Abhay, the owner of the orphanage.

Further, Samar and Toshu spend some family time with each other.

On the other hand, Anu expresses her wish to visit the beach and have fun with Anuj and Anupama.

Meanwhile, Samar gets sympathetic to Vanraj and discusses it with Toshu and at the same time tries to deny his love for Vanraj.

Vanraj feels supported and contented after hearing words of kindness through Samar.

On the other hand, Anuj feels angry with the people who leave their daughters at the doorstep of an orphanage as girls are the precious blessings of life.

Anuj feels grateful for an orphanage as he was also supported by one of them.

Later, Abhay talks about how Anu has big dreams in her eyes while Anupama says that the world is a ruthless place and needs the care of parents.

Meanwhile, Kinjal talks to her unborn child and tries to swing the soft toy nearby like a child.

After some time, Kinjal slips and falls down to the ground.

On the other hand, Anuj talks about how a little child needs a little world to prosper as adoption helps a needy child.

Later, Anupama talks about how people are hypocrites as they spend thousands of rupees to have their own children but never visit an orphanage.

Anuj and Anupama support the normalisation of adoption.

Meanwhile, Kinjal looks safe as she fell onto the bed but gets scared for her child.

Further, Abhay gives Anuj and Anupama permission to take Anu to visit the beach with them.

Later, Anupama thanks Anuj for being vulnerable with her and sharing a part of his life with her by bringing her to the orphanage.

As Anu writes her name on the sand it gets erased by the waves while Anupama talks about never losing hope and happiness will follow.

© Copyright tellybest.com, 2020, 2021. All Rights Reserved. Unauthorized use and/or duplication of any material from tellybest.com without written permission is strictly prohibited.
Cached Saved on: Saturday 1st of October 2022 11:21:13 PM