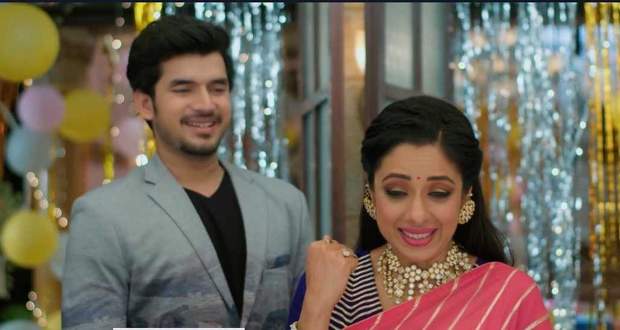 Today's Anupama 1st March 2022 episode starts with Anupama pumping with excitement after hearing from Kinjal about her pregnancy.

Kinjal tells Anupama that this is her gift for Anupama’s birthday that she wanted to give her.

Anupama recalls her experience of being a mother for the first time and plans for her promotion as a grandmother.

As Anupama asks Kinjal why she did not tell Toshu first, Kinjal replies complaining about him being sullen all the time.

Anupama and Kinjal share a hug with Anupama blessing Kinjal to become a greater mother than herself.

Meanwhile, Anuj waits eagerly for Anupama’s return for her announcement of their marriage with the other family members.

Bashing with style, Anupama comes downstairs while starting a song and begins to dance in joy in front of everybody else.

Seeing Anupama dance with mad happiness, Anuj gets assured that she is about to declare about them to all others.

However, Anupama announces Kinjal’s pregnancy and how she is about to become a grandmother.

All the family members including Vanraj elate in happiness as they hear the news, Anuj, too joins them in that happiness despite being a bit dejected.

While dancing around Kinjal and Toshu, Anupama bumps with Anuj and remembers she had to give her answer to his proposal.

Her smile disappears as she sees Anuj covering up his sorrow with a supporting smile for Anupama.

On Kinjal asking what Anupama had to say earlier, Anupama gets flushed and tells everyone it was about the website launch of the dance classes.

As she sees Anuj’s disappointed face, a pang hits her chest making her suffocate.

Anupama leaves the party making an excuse and reminisces about Anuj’s hopeful face as tears slip from her eyes.

Sitting on a bench, Anupama bawls her eyes out as once more, she let Anuj down by sacrificing her happiness for others’ smiles.