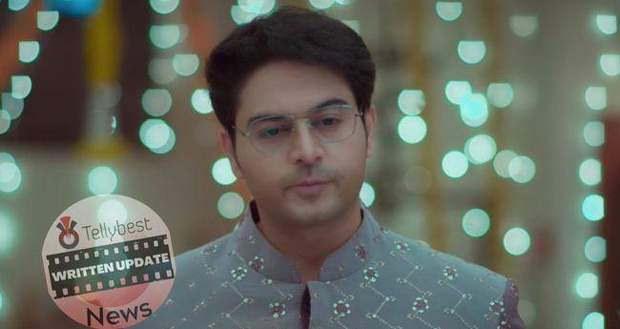 Today's Anupama 1st November 2022 episode starts with Vanraj making it crystal clear that he will not entertain any arguments from anyone regarding his decision to oust Pakhi and Adhik as he will never accept their wedding.

Hasmukh comes ahead and pleads with Anuj to see the light of reason and tells him to take up the responsibility of Pakhi-Adhik.

Kavya and Samar also chime in saying that if Pakhi-Adhik are not taken care of then they will have to live on the street.

Hasmukh also says that Anupama will anyway have to take them home as she is the daughter-in-law of the Kapadia’s.

Anupama prays to God to give her the strength to face the new challenges and new relationships that are in store for her in this new year.

Meanwhile, Pakhi-Adhik are fast asleep outside and are jolted awake by Anupama, who tells them that she has decided to take them with her.

Pakhi excitedly asks whether this means Anupama has forgiven them, to which Anupama replies with a sharp no, and tells Pakhi-Adhik to not forgive themselves either.

Anupama asks them angrily if they thought that getting married is exactly as shown in the videos where the protagonists despite all obstacles live happily ever after.

Anupama also asks Pakhi-Adhik if they took their parents for granted.

Pakhi pleadingly asks Anupama to forgive her but Anupama responds by saying that right now she isn’t in the mindset to do that and they start to leave.

Pakhi struggles to carry her suitcase and drops it, Samar tries to help her but is stopped by Kavya.

Kavya tells Samar that Anupama knows exactly what she is doing.

Meanwhile, Anuj fetches Anu and they all sit in the car. But, before they could drive off Samar stops them to bid adieu to Pakhi.

Samar asks Pakhi disappointedly why did she do what she did as she has insulted the entire family.

Samar also threatens Adhik with dire consequences if he doesn’t take care of Pakhi, and Anupama drives away.

Anupama starts reminiscing about the childhood days of Pakhi when suddenly the silence is broken by Anu who asks Pakhi if she is going to stay with them forever, to which Anuj replies with an angry yes.