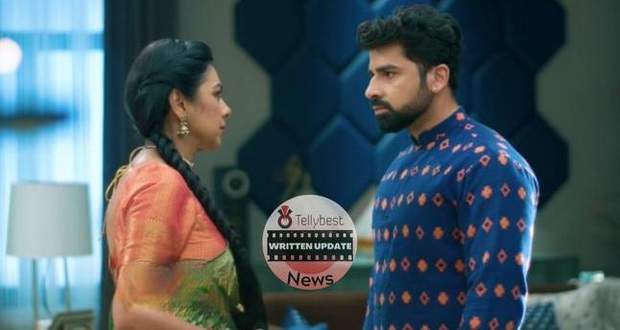 Today's Anupama 1st October 2022 episode starts with Kinjal screaming at Toshu about how dare he touch her while Leela, Hasmukh, Vanraj, Kavya, Bapu Ji, and Rakhi joins her.

At Kapadia House, Anuj and Anupama spend time together when Anuj says he just wants to live with Anu and Anupama.

However, Anupama gets a call from Kinjal and she looks at Anuj hesitantly.

He rolls his eyes first but asks Anupama to pick it up.

Back at Shah House, Kinjal sits while everyone else surrounds her in a circle.

Kinjal says she came to Shah House not as Toshu's wife but as a daughter of this house, so how dare Toshu even try to touch her?

Kinjal painfully reveals that she is feeling suffocated in Toshu's presence and that is why she went to live with Anupama.

Feeling pressurised, Kinjal says she won't let anyone use Pari as an emotional blackmailing machine for her.

Just then, Anupama arrives and announces no one will put pressure on Kinjal while Leela and Vanraj both defend themselves.

Kinjal shuts Toshu up when he charges at Anupama and reveals that she came here just because she didn't want to be a burden on Anupama.

Anupama asks Kinjal softly what she wants while Kinjal says she wants to divorce Paritosh.

Hasmukh loses it and sits on the sofa while Leela bangs her head against one of the pillars, calling Anupama a witch for eating everyone's happiness.

However, Kinjal corrects Leela saying it was first Vanraj and then Toshu who ate all the happiness from Shah's house.

Rakhi supports Kinjal and inwardly feels thankful that Kinjal finally realized what kind of a donkey she married.

Kinjal announces she will not leave Toshi alone just like that and stay until the divorce is finalized.

Paritosh begs on his knees while Kinjal says she is exhausted hearing Paritosh's meaningless apologies.

Kinjal says since Paritosh couldn't even find a decent job and used it for adultery, how would he be a good father for Pari who even called Pari a disgusting burden even before she was born?

Without shame, Kinjal asks why she should stay with Toshu anymore but Toshu says Kinjal is crossing a line.

Kinjal says she will even prove how disgusting Toshu is in court but Vanraj gets miserable hearing this.

Suddenly, Hasmukh asks Leela and Vanraj to shut up and announces only Kinjal can decide what kind of punishment Toshu deserves since she is hurt.

Hasmukh further adds that he doesn't want the Shah name to be dirtied in court but it should be Kinjal's choice only.

Toshu starts clapping his hand and tells Kinjal she is free to do anything while Anupama asks Toshu to at least have some dignity and shame left in him.

Kinjal screams at Toshu to not speak like that to Anupama and just wait and watch.

Leela says Kinjal is indeed the by-product of a Naagin (Rakhi) while Kinjal asks Anupama if she is with her in this fight.

© Copyright tellybest.com, 2022, 2023. All Rights Reserved. Unauthorized use and/or duplication of any material from tellybest.com without written permission is strictly prohibited.
Cached Saved on: Monday 21st of November 2022 05:32:01 PMCached Disp on: Thursday 1st of December 2022 02:37:00 AM