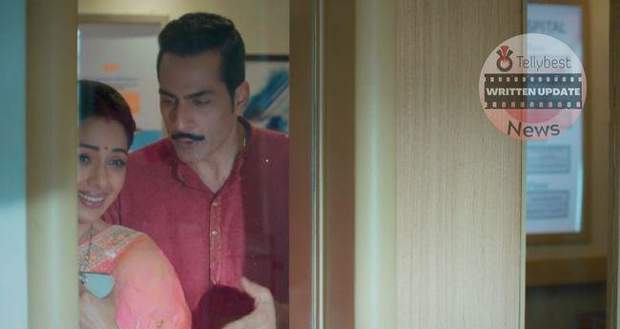 Today's Anupama 1st September 2022 episode starts with the Shahs celebrating the birth of the baby in the hospital with ritual songs and Vanraj tries to call Toshu.

Toshu is in the car as he picks up he immediately asks about his health of Kinjal, however, Vanraj explains to him that everything is fine but he has to give the good news that Toshu is a father now.

Toshu exhilarates joy and happiness and says he is coming back soon.

As Toshu hangs up the call he tells to another person that he will have to go.

Rakhi comes in and everyone congratulates her as Anupama hands the baby to her.

She can not contain her happiness and begins crying while Samar takes photos of her crying and hugging Anupama.

She is informed about the absence of Toshu and gets furious, however, everyone says that Toshu is out for work and so we should understand him.

She goes out of the room and Vanraj and Anupama follow while Anupama asks the reason for her anger since internally she can sense something is there that Rakhi wants to tell them.

Later Rakhi tells them about her decision of taking Kinjal and her baby with her to Rakhi’s home.

Vanraj says this is something they can decide later for now they should just enjoy the moment.

Meanwhile, in the Kapadia mansion, Choti asks Anuj to go to the baby and see her but Anuj is reluctant.

On Choti’s stubbornness, he shouts at her and scolds her that children are not allowed in the hospital.

Choti runs away and GK goes to take care of her, thinking that in Anupama’s absence Anuj has gotten so moody.

Anuj sees the lamp in the name of the baby and Choti going off so he goes to add some oil but is unable to reach there due to his wheelchair.

As Anuj tries to get on his feet for it, he weakens and falls.

Barkha, Ankush, and Adhik come running and picks him up while Ankush tells him that he will stay with him no matter whether he likes it or not.

Anuj tells the trio to not tell anything of this event to Anupama.

On the other hand, Anupama goes to give sweets to the nurse and sees Rakhi lost in her mind and eating sweets though she eats sugar-free sweets.

She approaches Rakhi and asks why is she stressed about Toshu, Rakhi begins crying and tries to convey this to Anupama but she is unable to speak it out loud.

Before she can tell anything, Pakhi comes in and takes for Rakhi to complete a ‘Nani ritual’ while Anupama is left in shock thinking of what Rakhi wants to tell.

© Copyright tellybest.com, 2020, 2021. All Rights Reserved. Unauthorized use and/or duplication of any material from tellybest.com without written permission is strictly prohibited.
Cached Saved on: Sunday 2nd of October 2022 12:42:24 AMCached Disp on: Monday 3rd of October 2022 09:03:29 PM