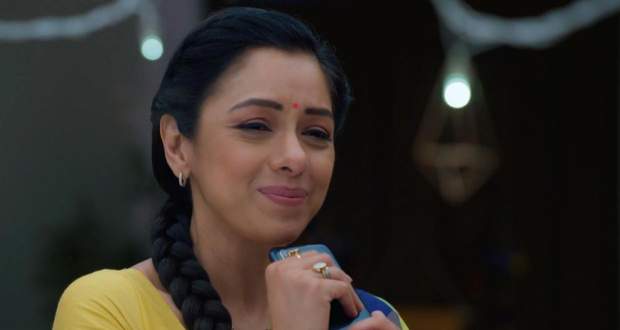 Today's Anupama 20th April 2022 episode starts with Anupama looking over the preparations and gifts that the family members will take to Anuj’s house for the ritual.

Hasmukh, Samar, Kinjal, Pakhi, Dolly, and others assemble in the living room to get ready for the ritual while Leela tries to call her mother.

As Dolly and Anupama inform that Sanjay and Bhavesh will not be able to join them for this ritual, Leela jumps in to mock the situation.

Leela tells Anupama that her first ritual of the marriage will remain incomplete as there need to be at least four men from the bride’s side.

Hearing Leela’s bitter words, the mood gets upset among the family members and Anupama while Vanraj feels weirdly angry on seeing the ritual preparations.

At last, as they were about to leave with three males only, another person joins in to help them which turns out to be Paritosh.

Anupama giggles with joy on seeing Paritosh willing to go with the others to Anuj’s house and thanks to the god for helping her.

Once again, Leela and Vanraj feel dejected after seeing everything go according to Anupama.

At Anuj’s house, Anuj gets ready while Malvika, Devika, and GK do the preparations when Hasmukh and others show up at the entrance.

On seeing Toshu, Anuj and Malvika get a bit surprised but welcome him wholeheartedly.

Meanwhile, Leela tries to talk ill about Anupama’s marriage but gets stopped by Anupama who makes it clear that she will not tolerate anything negative from now on.

Devika calls Anupama so that the ritual can start as Anuj refuses to do anything without Anupama being there.

The family members try to prank Anuj but fail to do so as Anupama signals Anuj through her eyes.

Everybody engages in laughter and shares the happiness of the beginning of MaAn’s marriage.