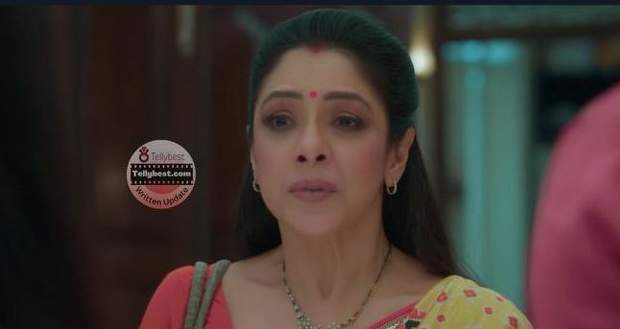 Today's Anupama 20th December 2022 episode starts with Adhik asking Pakhi to stop apologizing to him as he cannot accept it right now and needs time to think about things.

Pakhi feels dejected after hearing Adhik’s response while Anuj asks Adhik to get inside the car.

Adhik separates his hand from Pakhi’s and leaves after getting into the car and Pakhi cries standing on the road.

Leela asks everyone to get inside the house as they have seen enough drama for the day.

Anupama continues to stare at Pakhi while she sobs violently but gets called by Anuj who asks her to get inside the car.

With eyes fixed on Pakhi, Anupama gets into the car and leaves the neighborhood as Anuj drives away.

Anuj notices Anupama’s gloomy face and holds her hand to comfort her as he knows that Anupama is feeling restless seeing Pakhi’s condition.

After returning to the Kapadia mansion, Anuj aids Anupama’s stress by massaging her forehead while Anupama peacefully rests her head on Anuj’s lap.

Anuj says that he knows how Anupama is affected due to Pakhi but tries to explain to her that she did whatever she could.

Anupama tells Anuj that she feels scared sometimes that whatever happened to her might repeat itself once more.

Anuj asks Anupama if she has no trust in him to which Anupama replies that she trusts him more than herself.

Anupama says that she has no faith in fate as it has betrayed her numerous times.

As Anupama asks the same question to Anuj about the fear of losing her after getting to meet her after 26 years, Anuj replies that everyone is afraid of losing the things they adore.

Anupama asks Anuj then how she is supposed to leave Pakhi on her own as her mother.

Meanwhile, Vanraj expresses his grief over Pakhi and how he felt hurt by Pakhi’s allegations.

Vanraj says that he did everything that he thought would be good for Pakhi but is getting blamed as the person who ruined her life.

Pakhi hears Vanraj accepting that Anupama was right about her and did the right thing by throwing her out of the house.

Pakhi asks Vanraj if he also thinks that she is in the wrong to which Vanraj replies that he is the one who is wrong.

As Pakhi points fingers at other family members who failed to maintain a peaceful marriage, Vanraj says that only God has the power to make her understand a thing.

Vanraj hears Pakhi whining about coming into that house and asks her to get out if she finds it displeasing.

Later, Kavya tries to convince Vanraj to take a decision about Pakhi but Vanraj states that from now on, he is not going to get involved in Pakhi's matters at all.

Anupama tells Anuj that no one is trying to understand Pakhi’s perspective and are being cruel to her even though she is wrong.

Barkha, Ankush, and Adhik come to talk to Anuj and Anupama and say that they want to say something to them.

Barkha tells Anupama that it is physically impossible for anyone to live with Pakhi and they should think about what they need to do in the future.

As Anupama asks Barkha what she means by that, Barkha says that they should move forward with Pakhi and Adhik’s divorce.

© Copyright tellybest.com, 2022, 2023. All Rights Reserved. Unauthorized use and/or duplication of any material from tellybest.com without written permission is strictly prohibited.
Cached Saved on: Wednesday 25th of January 2023 09:49:30 AMCached Disp on: Wednesday 1st of February 2023 10:03:41 PM