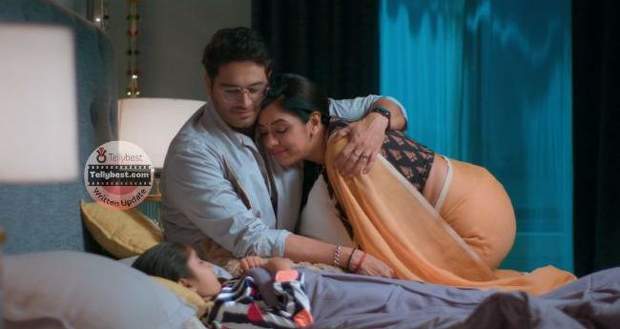 Today's Anupama 20th January 2023 episode starts with Anuj and Anupama getting shocked at hearing Barkha’s revelation about Ankush having an illegitimate son.

Anuj asks Barkha and Ankush if they are playing a prank on him and Anupama but Barkha says that she is telling the truth and Ankush has a 15-year-old son.

Anupama asks Barkha why she did not say anything to Ankush all these years if she was aware of the truth.

Barkha says that all the things about his extramarital affair and son have been told to Barkha by Ankush only and she had no problem until they were separate from her life as she only wanted social and financial support from Ankush.

Barkha tells Anupama that she chose to sacrifice her relationship at that time as she did not have any support other than Ankush.

However, now that Ankush wants to bring his son into this house, Barkha will not remain silent anymore.

Ankush says that he gave Barkha the option to leave him but Barkha was the one who decided to stay with him despite his affair and child.

Ankush says that his son just wants to spend some time with him and wants to enroll in the nearby institution which is the reason he is bringing him here.

After announcing that his son will come and live here, Ankush leaves with Barkha following him.

Anuj and Anupama are left blank hearing such news and find it hard to believe that Barkha has been continuing to experience such a thing over the past 15 years.

Anuj tells Anupama about life’s unpredictability while a man delivers a package addressed to Anupama to Anuj and Anupama.

Anupama takes out the box and notices the package is addressed to Anu when Anu comes and grabs it in excitement.

Anu gets happy to see the dress she wanted inside that box while Anuj and Anupama get creeped out on reading the card and discovering that it is sent by Maaya.

Anu says that the dress is sent by Maaya as the bag has angels on it while Anuj-Anupama finds it very weird to receive something like that.

Meanwhile, Kavya asks Vanraj to tell her whatever he wants quickly as she needs to leave for her work.

Vanraj says that Kavya and her director have become a bit too close friends in the past two days with Leela asking Kavya not to mingle with such types of people.

Kavya asks Leela how she can tell that Mohit is a bad person by looking at him for two minutes to which Leela says that she does not like him which is enough for a reason.

With a frustrated face, Kavya says that she goes to work there and does not do anything weird or shameless.

Leela reminds Kavya how she had an affair with Vanraj in the past which hurts Kavya as she understands the problem.

Kavya asks Vanraj if he thinks that she can start an affair with anybody just like they had a relationship in the past.

Vanraj tries to deny while Kavya says that as long as she is right, nothing else matters and asks Vanraj and Leela to change their way of thinking.

Later, Leela tells Vanraj that people find happiness outside when they are not happy with their marriage.

Anupama and Anuj decide to talk to Maaya as they feel that her relationship with Anu is something that needs their approval first.

The next day, Anupama tells Anu the importance of Makar Sankranti and Uttarayan and prays to the god together.

Anuj asks everyone to get ready as they have an invitation for an event on Makar Sankranti.