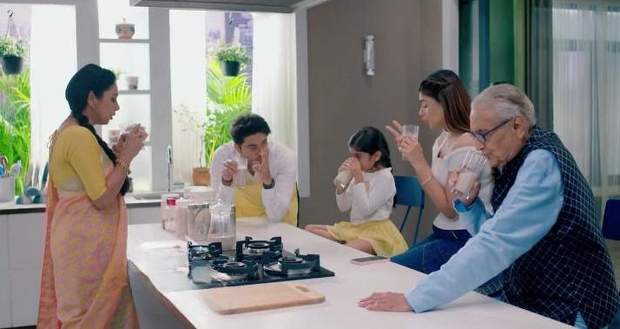 Today's Anupama 20th July 2022 episode starts with Anupama and Anuj discussing Anu’s admission to school and their schedule for the day.

Anu comes with a polaroid camera and clicks a picture of Anuj and Anupama together.

Seeing the camera, Anuj asks Anupama and Anu to gather for a selfie and tells them that he will keep the picture with him forever.

Anuj, Anupama, and Anu arrive at the breakfast table and get surprised to see numerous dishes being decorated there.

Barkha welcomes them and tells Anu that she has prepared all dishes she could think of because she does not know what Anu’s favorite is.

Seeing so much food, Anu begins to talk about the food she used to eat in the orphanage but Anupama stops her and tells her that she can eat anything here.

After breakfast, Anuj and Anupama inform everyone that they are going to Pakhi’s school to take admission for Anu.

Barkha asks Anuj and Anupama to admit Anu to a bigger school that has top-class facilities but Anupama replies that a school’s ranking is not decided by its building’s height or AC facilities.

While discussing business, Ankush asks Anuj if he can manage the offices of Mumbai and Bangalore to which Anuj acts a bit hesitant.

Barkha also stands beside Ankush and tells Anuj that he is used to managing several projects in the US.

Hearing this, Anuj asks Ankush why they have come to India suddenly leaving behind all their business in America which makes everyone silent.

Anuj does not talk any further and leaves with Anupama and Anu but Ankush understands that Anuj is aware of the truth and tells Barkha that they should have told him earlier.

Meanwhile, Pakhi plans to meet Adhik after Vanraj drops her at college but gets shocked to see Anu, Anupama, and Anuj there.

As Anupama reveals that they are there to admit Anu to Pakhi’s school, Pakhi straightaway asks Anuj and Anupama to take Anu somewhere else.

Anu requests Pakhi as her elder sister but Pakhi asks Anu not to call her that which offends Anuj a bit.

Pakhi asks Anupama to choose any one of her daughters and leaves after warning them to keep Anu away from her.

Anuj decides they he will admit Anu to another school and takes her away with him.

Later, Anupama apologizes to Anuj in Pakhi’s stead and takes Anu with her to meet Leela and Kinjal.