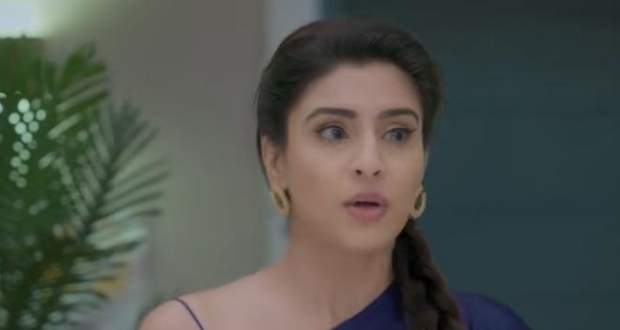 Adhik reminds Sara that they have to go to Patel Uncle’s place for dinner and Sara extends the invite to Anupama as well.

Anupama says she’s busy today so she won’t be able to come and takes leave.

Barkha says to Anupama that now that she’s Anuj’s wife she should improve her standards.

Barkha questions how much money she can earn from this academy.

Anupama says she wants to be an ordinary woman even if that means she’ll earn less money.

Anupama wants to stand on her feet and build her own identity.

Meanwhile, Hasmukh brings chai for Vanraj and asks if he’s troubled about work.

Vanraj questions how long will he keep looking for a job and asks what is he doing wrong.

Hasmukh says that he just needs to keep trying hard.

Samar comes and informs them that he’s going to the dance academy.

In the dance academy, Vanraj tells Samar that he doesn’t think Anupama will come to the academy and asks if he could work there.

At that time, Anupama enters and gets to work.

Adhik tells Barkha that she should start going to the office.

Barkha says that she wants to let Ankush try first and if he fails Adhik will take over that role.

Barkha tells him he needs to get closer to Anuj like Anupama’s kids are to him.

GK enters the room while they’re talking and tell him not to enter the room with such a surprise.

Anupama comes to the Shah house with Sara and Pakhi welcoming her.

Pakhi says that she didn’t expect Sara to come to their small house.

Pakhi asks Sara what she’d like to drink and everyone is shocked to see Pakhi’s politeness.

Sara invites everyone to the Kapadia home so that they could mingle.

Pakhi gets excited to go there and Anupama also extends the invitation.

Vanraj says that they came there just yesterday so why should they come again.

He points out Pakhi’s change in behaviour after she saw Anupama’s new house.

Vanraj refuses to go there.

As Barkha and Adhik return back home from a party, Sara, Anupama, Pakhi, Kinjal and Samar surprise them at the house.

Sara tells Adhik to go back to his room if he doesn’t want to be there.

But Adhik looks at Pakhi and says he wants to stay.

Anupama notices the exchange of looks between Adhik and Pakhi and gets concerned.

© Copyright tellybest.com, 2022, 2023. All Rights Reserved. Unauthorized use and/or duplication of any material from tellybest.com without written permission is strictly prohibited.
Cached Saved on: Tuesday 22nd of November 2022 02:12:43 PMCached Disp on: Friday 2nd of December 2022 03:34:01 PM