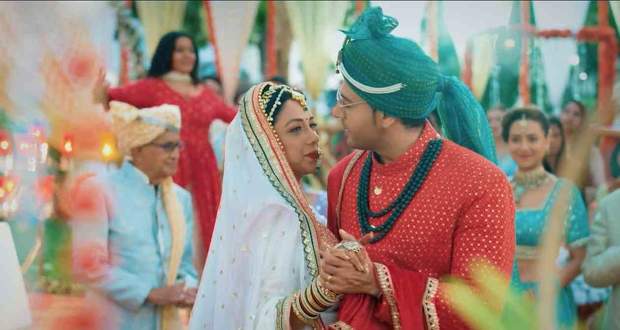 Today's Anupama 20th May 2022 episode starts with Anupama looking gorgeous as she takes vows with Anuj about self-respect.

Both of them narrate lines saying that self-respect is necessary for a marriage to be successful before love happens.

Both of them promise to even respect each other’s likes and dislikes but never injure each other’s self-respect in the process.

A second later, Vanraj shows up at the wedding with a bouquet.

Anupama looks nervous as he congratulates her and Anuj.

Kavya is happy to see Vanraj not fighting with Anupama on her special day.

Paritosh then announces a family photograph to be taken together.

Later, Devika teases Vanraj alone that he is not so much of a bad guy after all.

Samar, Paritosh, and Pakhi properly set the Mandap once again perfectly before Anuj and Anupama enter it.

The couple bows down towards the Mandap before they sit inside it.

Leela and Hasmukh fulfill the duty of doing Anupama’s Kanyadaan.

Anupama gets emotional as Leela tells Anuj to properly take care of her.

After Kanyadaan, Anu’s kids, perform a ‘Mummy Daan’ ritual where they sincerely hand Anupama in Anuj’s nurturing hands, threatening him with drama if he stops loving Anu.

Anuj chuckles at their threat as the priests announce it is time to take Pheras.

Anupama and Anuj grin from ear to ear.

Anuj thanks him and fills Anupama’s forehead as she closes her eyes.

He makes fun of the extra vermilion she gets on her nose.

Anuj then ties the Mangal sutra around Anupama’s neck, winking at her as they are declared husband and wife by the priest.

Anupama hugs all the family members, crying a little.

Hasmukh gets emotional saying that the fragrance of his home, Anupama, is leaving.

Leela apologizes to Anupama again as she tells everyone to get a Bahu like her but not a Saas (mother-in-law) like Leela.

This is how MaAn’s wedding takes place successfully.