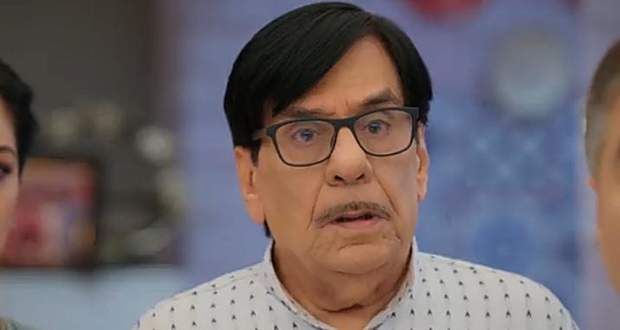 Meanwhile, Anupama gives a befitting reply to Kavya and tells her that she should have brought Hasmukh to Shah's house.

However, Kavya manipulates Vanraj and turns him against Anupama while Anuj talks about Vanraj to GK and they decide to hide the news from Hasmukh.

Leela stops Kavya from insulting Anupama accepts that she is the sole reason behind Hasmukh leaving.

Vanraj tells Leela to fix her mistake and bring back Hasmukh and to forget that she has a son until Hasmukh comes back.

He states that Leela won't be given entry inside the house until Hasmukh returns and tries to slam the door shit but Anupama stops the door with her hands.

They argue when Vanraj sees Hasmukh and suddenly opens the door widely as a flashback shows him overhearing Anuj's conversation.

Vanraj runs to Hasmukh and hugs him while Anupama hopes that Hasmukh returns to Shah's house as it is his original place.

Hasmukh says that the house is Leela's, not his, and says that he can't come inside as his heart and mind won't be with him if he comes back to Shah's house.

He tells Vanraj to not punish his mother while Leela apologizes to Hasmukh saying that Kavya instigated her.

However, Kavya tries to question Leela when Vanraj starts scolding her causing an argument.

© Copyright tellybest.com, 2020, 2021. All Rights Reserved. Unauthorized use and/or duplication of any material from tellybest.com without written permission is strictly prohibited.
Cached Saved on: Wednesday 1st of December 2021 11:26:53 PMCached Disp on: Monday 6th of December 2021 07:47:43 AM