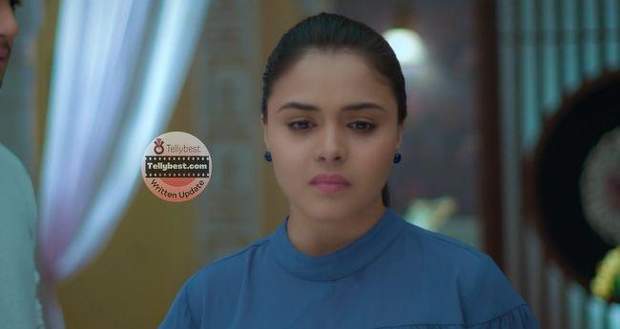 Today's Anupama 20th November 2022 episode starts with the jeep stopping just in front of Anuj’s car while he and Anupama cover their face in fear.

As Anuj and Anupama stare at the jeep with fearful eyes, some boys appear from inside and point a gun at them.

Anuj and Anupama raise their hands and surrender from doing anything seeing the guns but the boy fires a shot.

However, that shot turns out to be plastic arrows, and the boys burst out laughing, saying it is a prank.

Anuj comes out of the car and shouts in anger at the boys but they leave without giving away a second glance.

Anupama tells how youngsters these days do such unethical things in the name of social media.

Meanwhile, Adhik asks Pakhi why she chose that particular house and neighborhood when he had shortlisted better locations than that.

Pakhi asks Adhik to relax as it is better to live close to the family and the rent is also considerably low.

Adhik tells Pakhi that he will not tolerate her nonsense behavior and steps out to buy some groceries.

Leela warns everyone about Pakhi’s bad intentions behind coming into that neighborhood but Vanraj interrupts Leela from speaking against Pakhi.

Vanraj asks everyone to let Pakhi enter the house whenever she wants and walks off from there.

Adhik calls Leela and assures her that he will try his best to keep Pakhi in check so that she does not cause any problems.

On the other hand, Anuj and Anupama encounter a newly-married couple asking for a lift at the street’s aide.

Anupama asks Anuj to continue to drive as it is dangerous to trust strangers these days.

However, after passing by them, Anuj and Anupama stop their car as their humanity does not allow them to leave that couple on such an isolated path.

The couple introduces themselves as Dimple and Nirmit respectively and thanks Anuj and Anupama for giving them a lift as they are in a bad situation.

After thinking for a bit, Anuj and Anupama ask Dimple and Nirmit to come inside the car and take off along with them.

Dimple tells Anupama and Anuj about her and Nirmit being a Punjabi and a Gujrati respectively.

As Nirmit and Dimple reveal that they married by running away from home, Anupama gets reminded about Pakhi and Adhik and asks them why they did such a thing.

Dimple says that they are guilty of what they did but their families were not ready to listen and would make her marry another man.

At the same time, Kinjal talks to Toshu about doing a job and offers a position under her to which Toshu instantly agrees.

Anuj and Anupama talk with Dimple and Nirmit about their love story and drive through the entire path.

© Copyright tellybest.com, 2022, 2023. All Rights Reserved. Unauthorized use and/or duplication of any material from tellybest.com without written permission is strictly prohibited.
Cached Saved on: Monday 21st of November 2022 12:45:28 AMCached Disp on: Sunday 4th of December 2022 11:33:59 PM