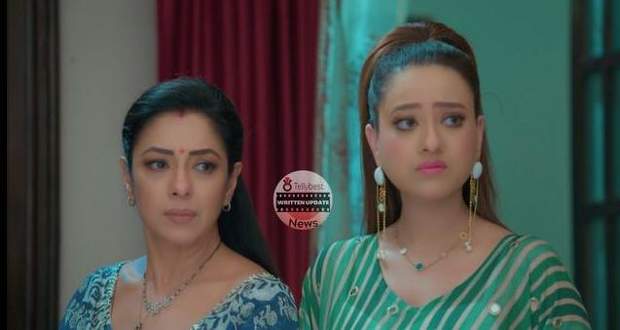 Today's Anupama 20th October 2022 episode starts with Leela suggesting that they should marry off Pakhi as soon as possible so that they can get relieved of her.

Anupama asks Leela not to use such language while defining Pakhi because she is still her daughter even though she can sometimes be impolite and stupid.

Anuj says that Pakhi is still a young adult who does not know the complexities of life and needs support from them at every stepping stone.

Anupama agrees with Anuj and asks Leela to drop the matter of Pakhi’s marriage as it is not her age to marry yet.

However, Pakhi says that she loves Adhik and will marry only him in this life which angers Vanraj.

Vanraj shuts up Pakhi and announces that she is not allowed to go to college from now and even cannot step out of the house anymore.

Hearing that, Pakhi runs away to her room and locks herself while Kavya goes after her and asks Pakhi to open the lock.

Not getting any response, Kavya decides to call Samar to handle the situation.

Pakhi calls Adhik and tells him how Vanraj has banned her from going out and might also take away her phone.

Adhik asks Pakhi to relax as they genuinely love each other and cannot be separated from these mere tricks.

As Adhik assures Pakhi that he will not leave her side, Pakhi relaxes a bit and thinks about what she should do from now.

Barkha and Ankush leave with a sour relationship with Vanraj and the Shah family.

Anuj blames their fate as happiness does not stay long in their lives and always leaves early.

With a comforting hug for Anupama, Anuj gives her candy and asks her to calm down as she has a lot to handle.

Samar comes to Pakhi and assures her that he is on her side which relieves Pakhi.

In addition to that, Samar also asks Pakhi to make sure that she is self-sufficient for what is about to come in her life and does not get dependent on love.

After Anuj returns, he sits with Adhik and listens to him saying that he loves Pakhi genuinely and wants to be her pillar of support.

Adhik asks Anuj to give him a chance to prove himself by giving him a job in his company as he wants to stand on his feet to keep Pakhi happy.

Anuj keeps silent while Adhik requests him to understand once and give him one chance to prove his love.

While talking, Adhik reveals that he and Barkha initially decided to use Pakhi to manipulate Anupama but now he has changed.

Barkha and Ankush hear that and ask Adhik to shut his mouth which only worsens the situation.

Anuj stands silently while both Adhik and Ankush begin to blame Barkha for trying to manipulate everyone to get control of the Kapadia empire.

© Copyright tellybest.com, 2022, 2023. All Rights Reserved. Unauthorized use and/or duplication of any material from tellybest.com without written permission is strictly prohibited.
Cached Saved on: Monday 21st of November 2022 05:47:41 AMCached Disp on: Tuesday 29th of November 2022 10:28:55 AM