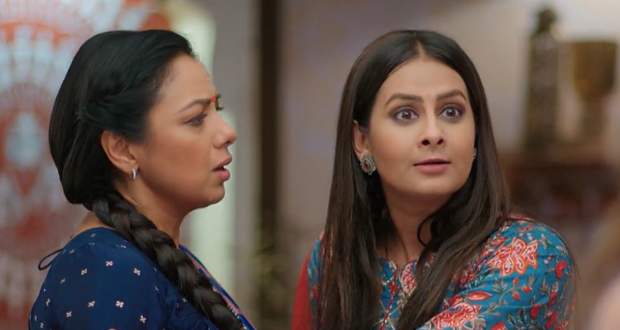 Kavya pushes Dolly in anger while Anupama reaches there in time and saves her.

Kavya talks back while Anupama insults her for disrespecting Dolly and says that she may become a bride but she will never be a good daughter-in-law and sister-in-law.

They leave while Nandani tells Kavya that she is mean and selfish and that Vanraj will tell it to her too.

Anupama gives water to Dolly and makes her understand that she is not blaming her but Kavya is not the only one at fault.

She sees Samar and Pakhi tense and asks them what they are hiding after which they reveal that she is not going to get divorced due to the government office being closed.

Anupama goes to talk to Vanraj while Kavya gets the same news and breaks down remembering the Priest's words.

Anupama walks to Vanraj's room while saying that the divorce shall not be delayed.

She gets tensed seeing the room empty and notices a note under their picture on the table.

© Copyright tellybest.com, 2020, 2021. All Rights Reserved. Unauthorized use and/or duplication of any material from tellybest.com without written permission is strictly prohibited.
Cached Saved on: Wednesday 28th of April 2021 09:23:20 PMCached Disp on: Thursday 6th of May 2021 05:35:11 AM