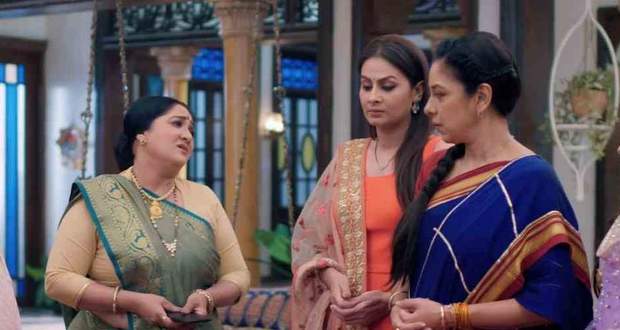 Today's Anupama 21st April 2022 episode starts with the rituals of the function starting and Anupama getting happy on seeing her children happy with Anuj.

Leela rubs salt on Vanraj’s wounds and asks him to stop Anupama from carrying on her stupidity.

Meanwhile, Hasmukh feels dizzy in the middle of the ritual and walks away from there to control himself.

GK asks if everything is alright with Hasmukh to which Hasmukh gladly replies with a reassuring yes.

At the same time, Leela calls her mother and asks her to come here as soon as possible after telling her the whole situation about Anupama.

On the other hand, Samar and Paritosh wash Anuj’s feet with rose petals and tap them dry while Pakhi wraps a cloth on Anuj’s head.

Vanraj sees the rituals going on as he passes by Anupama’s room and gets upset on seeing everyone happy while welcoming Anuj.

All the family members attack Anuj with sweets making Anupama laugh in enjoyment as she sees Anuj struggling to keep up with them.

As the request for dancing comes into the spotlight, Anuj puts forward a condition that everyone including Anupama will have to dance with him.

Anupama refuses at first but after a few minutes of pleading, joins Anuj and others in the dance through the video call.

Anuj, Anupama, and all others rock the dance floor with enthusiasm and end the video call on a happy note.

After Anupama hangs up, Anuj, due to pressure from Malvika and Devika, announces that he has something to tell everyone.

Later, Hasmukh along with others enters the Shah’s house with gloomy faces making Anupama panic in anxiety.

However, that turns out to be a prank and Hasmukh asks Anupama to be ready as Anuj wants to take her out tonight at 11 PM for a surprise.

Leela objects to Anupama leaving at night time but gets shunned by Hasmukh who approves Anupama to go freely.