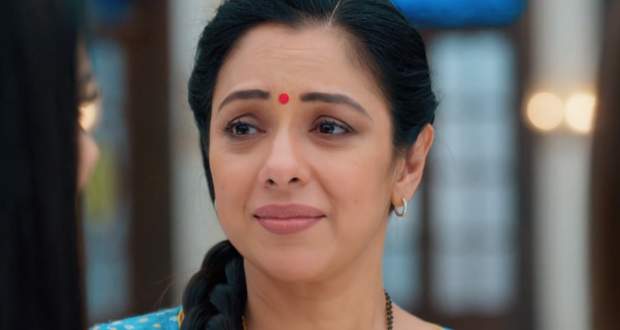 Today's Anupama 21 December 2020 episode starts with Paritosh and Kinjal coming to the dining table and sitting to eat. Baa taunts her for sitting without serving anyone.

Kinjal and Paritosh romance in the room while Anupama comes there. She asks Kinjal to maintain some distance in front of the family members.

Kinjal is ready to adjust according to the family and Anupama also asks Kinjal to stay with her or Pakhi till they get married with proper rituals.

Baa is pleased that Anupama has talked to Kinjal. Further, Baa says that Vanraj will take care of the expenses of the marriage.

Paritosh comes running and reveals that Kinjal is sick. Kinjal is suffering from stomach ache while her mother is on call.

Paritosh wants to take her to the doctor while Baa says they can use home remedies. Anupama rushes to get the remedy while Rakhi fumes in anger.

Kinjal gets some relief after having the remedy and recalls the time when her mom was not there to take care of her in childhood.

Anupama consoles her about her mother’s helplessness in taking care of the family and business. Pakhi witnesses their closeness and gets jealous.

Vanraj learns that they will get a new boss and some people might lose their job. Vanraj is sure he will be able to impress the new boss as well.

Anupama is ready to do the job again to take care of the family expenses. Baa thinks Vanraj can manage the expenses while Bapuji encourages her to do the job.

Baa says the housework can be done by Kinjal and at the same time Rakhi arrives there. Rakhi is not happy with Kinjal working at home.

She further brings food and mineral water for her. Rakhi taunts Anupama for making the new daughter-in-law do work.

Kinjal asks Anupama to go to the school and asks Rakhi to not bring food anymore.

Upcoming Anupama episode update: Anupama gets a job at the school while Vanraj is on the verge of losing his job.