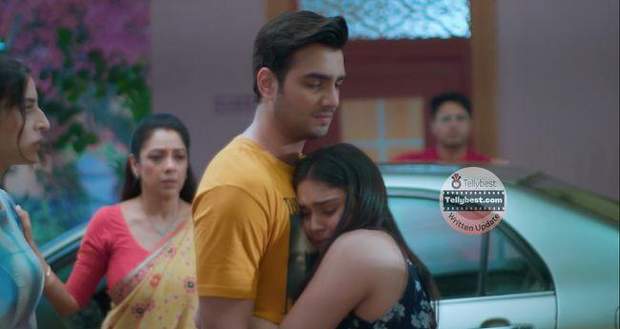 Today's Anupama 21st December 2022 episode starts with Pakhi walking out of the Shah household with a blank face and wondering where she should go now and call her home.

Barkha tells Anupama and Anuj that it is better for Adhik and Pakhi to get separated than to live together while suffocating each other.

Samar asks Anuj if Pakhi has gone to their house to which Anuj replies with a quick no.

As Anuj and Anupama hear that Pakhi has gone off somewhere without informing anyone, they set off to search for her.

Anupama spots Pakhi on their way and asks Anuj to stop the car with her eyes fixated on Pakhi’s direction.

Anuj turns his head in Pakhi’s direction and spots her lying on the road with an empty face.

Anupama comes out of the car and silently lies down beside Pakhi, taking her hands into her own.

Anuj stares at them from a distance and tells himself that a mother cannot help but be there with their children even if their children do countless mistakes.

Anupama asks Pakhi if they should leave for home, to which Pakhi asks her which home she is talking about.

Taking Pakhi with her and making her sit inside the car, Anupama and Anuj take off for their next destination.

In the meantime, Samar shows the family members the photo of Anupama and Pakhi lying down on the road.

Hasmukh says that he is proud of Anupama as a mother while Vanraj stares at the picture from a distance.

Anuj and Anupama bring Pakhi to the Shah neighborhood and ask her what she sees around her.

Pakhi replies that she sees people around her but Anupama asks her to change her perception a bit and see those people as individual lives.

Anupama demonstrates to Pakhi that each person around them is working for themselves and their families and is taking responsibility for their lives.

Someone is selling tea, someone is stitching clothes, and someone is doing labor to earn money for their families.

Anupama asks Pakhi to take responsibility for her own life and not sit idle as a useless person.

If she does not want to do a job, then she should at least do the work in her own house to maintain a healthy working environment.

Anupama asks Pakhi to leave her phone for some time and focus on some hobbies she likes to do like painting, poetry, etc.

Trying to make Pakhi realize that she needs an ambition in her life to act upon, Anupama says her spoilt behavior has ruined her life.

Anupama reminds Pakhi how she had three homes to return to but now has none.

Adhik comes with Barkha and Ankush while Vanraj, Leela, and others also gather around.

Pakhi tells Adhik that she has realized that she is no one until she is responsible for herself and admits that she has committed numerous mistakes.

Pakhi apologizes to everyone in the family and accepts that she lost everyone’s love due to her own mistakes.

Pakhi asks Anupama for her guidance and help with her redemption to which Anupama gladly agrees and gives a hug to Pakhi.

© Copyright tellybest.com, 2022, 2023. All Rights Reserved. Unauthorized use and/or duplication of any material from tellybest.com without written permission is strictly prohibited.
Cached Saved on: Wednesday 25th of January 2023 01:19:57 PMCached Disp on: Thursday 9th of February 2023 05:04:55 AM