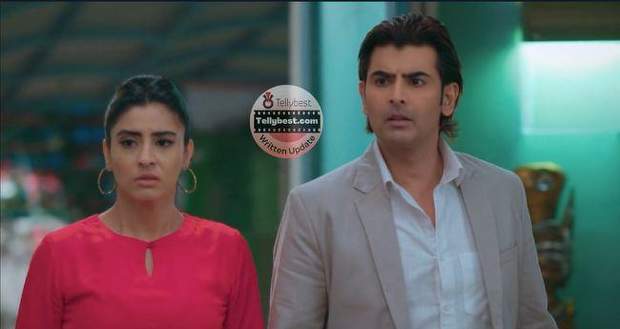 Today's Anupama 21st January 2023 episode starts with Anupama asking Dimple if she has taken all the pamphlets and banners during the car ride.

Choti Anu lets out a loud cheer as she is excited to meet Maya aunty at the event which causes Anuj and Anupama both to get silent for some time.

Afterward, Anuj mentions that the Shah family will also be there at the event which makes Anupama wish that their path does not cross with the Shah family.

Meanwhile, in Shah’s house, Leela offers Sesame (til) laddu to everyone but Hasmukh refuses to eat it saying that his teeth will fall off.

Leela gets angry hearing this and offers Vanraj the laddus but when Vanraj states that the laddus are very tasty, Hasmukh urges Leela to give him some.

Vanraj gives Hasmukh some laddu without Leela’s notice as angry Leela has refused to give him the sweets.

Just then, Samar also enters the hall to announce that he and Dimple have set up a stall in the event to promote their dance academy.

He also urges Leela to give him some laddu to take for Dimple since it is her favorite but Leela refuses by muttering angrily that nothing will go for Dimple from this house.

Pakhi and Adhik also arrive at the Shah house and everyone gets shocked to see Toshu descending the stairs in a fancy suit.

When Samar reminds Toshu that everyone is wearing tradition except him, Toshu announces that his purpose for going to the event is different from theirs in a cheerful voice.

Vanraj asks him if what happened last night was not enough magic and Toshu adds that it is a new day for him to start the business as it is his calling.

However, Kinjal also taunts Toshu by saying that some kites are also cut today when Toshu announces that he is planning to set up a stall at the event.

Vanraj reminds Toshu angrily that they have already put Leela’s jewelry in the mortgage but Toshu tells him not to worry as he is not going to crack any deal there.

Even Leela also sarcastically asks Toshu if he is going to teach people how to talk about big things and Toshu adds that he is just going to promote his business there.

Leela then announces the Kapadia family will also be there at the fair and she wishes she does not see them.

On the other hand, Ankush and Barkha decide to surprise the rest of the family members at the fair and Ankush grumbles that he is not able to meet his son this year.

After Ankush walks away, Barkha calls her lawyer to discuss how she will get the property if they divorce.

Later, at the fair, Anuj and Anupama look shocked when choti Anu mentions that she will fly the kite that Maya aunty will bring for her.

While the Kapadia family is busy meeting Dimple and Samar, they get surprised to hear a horn sound whereas Toshu tells Vanraj that this car is for status symbol.

On one hand, Ankush calls Toshu a fool and Anupama informs Anuj that Vanraj is here to keep Toshu in check; on the other hand, Toshu is busy showing off that he is a very busy person to attract clients.

Despite Leela's warning, Hasmukh and the rest of the Shah family go to meet the Kapadiya family except Vanraj and Leela glares at Hasmukh for this.

Meanwhile, Kavya is getting ready backstage when Mohit tells her that sometimes family presence can pressurize the models and he walks away after wishing Kavya luck.

Nervous Kavya sends Vanraj a voice text to tell him about the surprise and while Vanraj is listening to this, Leela thinks she needs to cut off Kavya's wings.