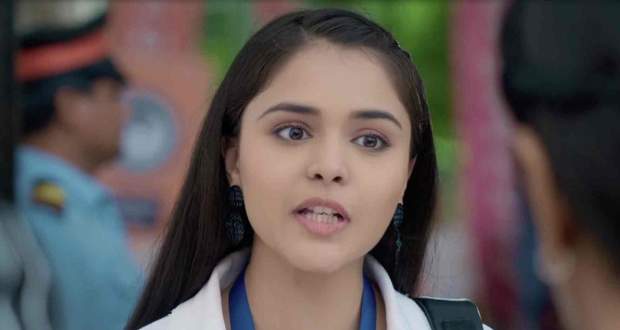 Today's Anupama 21st July 2022 episode starts with Anupama and Anu riding in the rickshaw and admiring the scenery.

However, curious Anu starts questioning Anupama why Samar, Paritosh, and Pakhi don't live with them as they are also her children.

However, Anupama smoothly handles the situation and tells her the benefits of having two homes.

Meanwhile, at the Shah house, Samar and Kinjal get ready to leave for their appointment while Leela asks about Anupama.

Kinjal assures that Anupama is directly coming to the clinic and leaves with Samar for the clinic.

Meanwhile, Anupama tells Anu to hold the end of her pallu while she buys the water bottle from the seller.

At the same time, Samar and Kinjal get worried as Anupama is late for the clinic while the time for the doctor to leave is nearing.

Meanwhile, Anu sees a man's item fallen on the ground and rushes to return it to him while Anupama rushes after her.

A motorbike rushes towards Anu and Anupama screams in fear while the biker manages to pull the brakes on time.

The people scold Anupama while Anu says that it's not Anupama's fault along with apologizing for the trouble.

On the other hand, Adhik praises Barkha in front of Pakhi and gives her a gift while saying that it's from Barkha.

Back in the market, Anu reminds Anupama about Kinjal while Anupama realizes that she has lost her phone.

Just then, the seller from the shop comes there and returns the phone to Anupama as it dropped near the shop in the hurry.

Later, Anupama reaches the clinic and feels guilty when she learns that Kinjal left.

Elsewhere, Adhik manipulates Pakhi and convinces her to come to the Kapadiya house to meet Barkha.

Meanwhile, at the Shah house, Leela, Vanraj, and others get angry learning that Anupama didn't reach the clinic while Anupama and Anu reach there just then.

Leela starts berating Anupama but Anu interrupts and reveals the reason for them being late making the Shah family understand the situation.

However, Leela and Vanraj still look at Anu and Anupama with bitterness in their eyes.