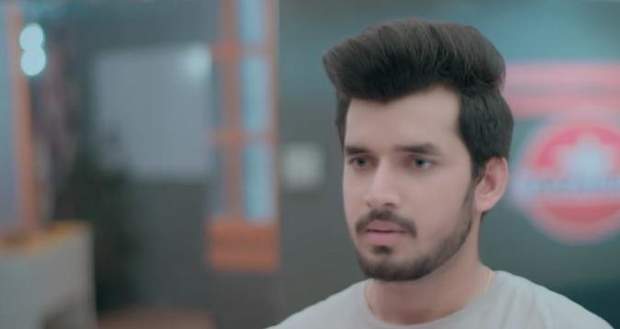 Today's Anupama 21st June 2022 episode starts with Pakhi and Anupama dancing along with Samar and Adhik.

A full-on dance party continues as Anuj and Ankush arrive at the house.

Anuj playfully jokes and tells Sara that they are not old and old is Sara’s father’s neighbour.

Rolling his sleeves up and wearing goggles with a red dupatta around his neck, Anuj starts dancing on Kajra-re along with Ankush.

However, Anupama gets uncomfortable when she notices Pakhi and Adhik exchange looks between dancing.

Meanwhile, Vanraj is concerned about Pakhi getting close to Adhik.

Leela tells Vanraj that Pakhi’s age group is like this where one is bound to be concerned.

After Pakhi clicks a selfie and posts it, Vanraj sees it and shows it to Leela.

Later, the Kapadias play a game of "Guess The Picture" in which the women win against the men after Barkha guesses New York’s picture right.

Anupama then tells everyone to sleep, saying Anuj and Ankush must rest too as they have spent the whole day working in the office.

However, Anuj mimics Anupama’s gestures, saying she must be tired too.

Everyone asks Anupama to continue the party for half an hour more while Barkha and Anuj cheer Anupama to dance.

Anupama feels shy but dances to the romantic song "Nainowale Ne" along with Anuj.

Meanwhile, at Shah House, Vanraj says he wants to hear a lullaby to go to sleep.

They both talk about fatherhood as Hasmukh tells Vanraj that a father can never take a mother’s place.

Vanraj wants Kinjal to stay at Shah House after the baby is born as he is ready to take care of it but Hasmukh tells Vanraj it should be Kinjal’s decision only as Anupama is no longer in Shah House.

Kinjal screams in pain while Anuj and Anupama hurry to take her to the hospital.

Meanwhile, Vanraj feels uneasy and tells Kavya feeling that something is wrong.

Vanraj and Ankush get into an intense argument at Kapadias while Anupama arrives home crying.

Vanraj asks what happened as Kinjal sits in the wheelchair and cries along with Anupama.

© Copyright tellybest.com, 2022, 2023. All Rights Reserved. Unauthorized use and/or duplication of any material from tellybest.com without written permission is strictly prohibited.
Cached Saved on: Monday 21st of November 2022 09:00:28 AMCached Disp on: Monday 5th of December 2022 01:10:07 PM