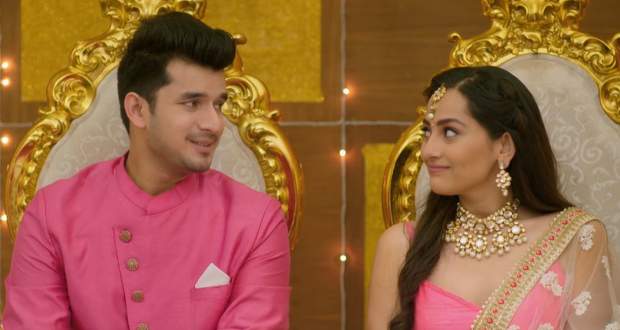 Today's Anupama 21 May 2021 episode starts with Leela asking the Shah's how she reached there while Samar informs them that they brought her there when she was sleeping.

Later, Leela tells Anupama that she is still angry with her while Samar announces to get the engagement started.

Advait comes there and Vanraj gets jealous seeing him interacting with Anupama.

Anupama recites a poem for Samar and Nandini about responsibility and honestly which makes Nandini uneasy.

Nandani feels guilty and takes Anupama outside where she reveals to her that she can never be a mother.

Ahe apologizes to her while Leela goes outside noticing Anupama and Nandini's absence.

Nandini recalls how she got into an accident and the doctor's had to remove her uterus.

Leela overhears their conversation and goes inside where she reveals to everyone that Nandini cannot become a mother.

Meanwhile, Anupama consoles Nandini and tells Nandini to reveal the truth to everyone.

Vanraj argues with Samar while Anupama stops him.

© Copyright tellybest.com, 2020, 2021. All Rights Reserved. Unauthorized use and/or duplication of any material from tellybest.com without written permission is strictly prohibited.
Cached Saved on: Sunday 19th of September 2021 01:02:36 AM