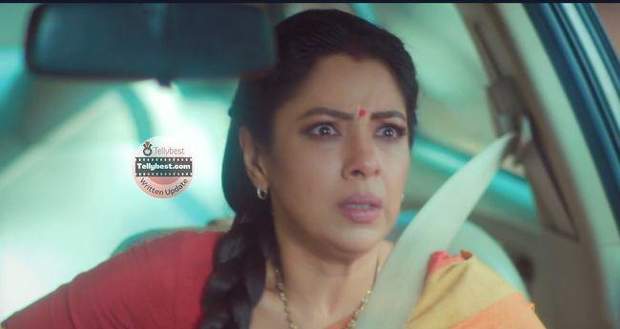 Today's Anupama 21st November 2022 episode starts with Dimple and Nirmit talking about their families and how they are planning to get remarried in front of Nirmit’s family again.

Dimple says that she is very happy that at least one family supports them and they will try to convince her family until they accept them wholeheartedly.

Anupama and Anuj approve of Dimple and Nirmit’s plan for the future and say that Dimple’s family may take time to get convinced.

Anupama tells Dimple that her family also loves her immensely just like she does and is in pain after losing her like that.

Anuj spots a dhaba at the side of the road and stops their car to get some food.

The four of them get off the car while Anuj and Anupama consider it a good decision to let the young couple come with them.

As Anuj, Anupama, Dimple, and Nirmit settle down and begin to order food, Anupama hears loud music and noise and notices the same jeep coming there that pranked them earlier.

Anuj gets fired upon seeing the same boys but Anupama asks him to calm down as she does not want a scene there.

The boys recognize Anuj and Anupama from a distance and their leader’s eyes fall on Dimple sitting with them.

The man zooms on Dimple in his camera and gives off a nasty smirk on seeing her up close in his phone.

Anupama spots the boys staring at them from a distance and gets uncomfortable but decides to keep it to herself.

Anuj and Anupama talk with Anu and G.K while the boys continue to check out Dimple from a distance.

Meanwhile, Samar congratulates Toshu on getting a job offer from Kinjal and asks him to accept it without any hassle.

Toshu replies that he is ready to accept the work he is given as he wants to be a good husband and dad after all that he has done.

Just then, Anupama calls Samar and Toshu through facetime and asks them about the condition of the house.

Samar and Toshu decide not to tell Anupama about Pakhi and Adhik shifting in that neighborhood but some neighbors ask them about Pakhi which Anupama hears.

Samar tells Anupama that Pakhi and Adhik have shifted to Nandini’s house leaving Anupama and Anuj in distress.

Seeing the boys make noise continuously, Anuj asks them their problem to which they reply that they are not interested in Anupama.

Anuj stands up to fight them but Anupama stops him and goes away with Dimple to the washroom.

At the same time, Samar and Toshu visit Adhik and Pakhi and tolerate Pakhi’s insulting words as they want to help them in shifting properly.

Pakhi sits comfortably on the sofa while Adhik, Samar, and Toshu work as she considers herself “Daddy’s princess”.

Anupama and Dimple come out of the washroom and find the head of that boy squad sitting outside and staring at them.

© Copyright tellybest.com, 2022, 2023. All Rights Reserved. Unauthorized use and/or duplication of any material from tellybest.com without written permission is strictly prohibited.
Cached Saved on: Monday 21st of November 2022 11:24:27 PMCached Disp on: Thursday 1st of December 2022 03:21:27 AM