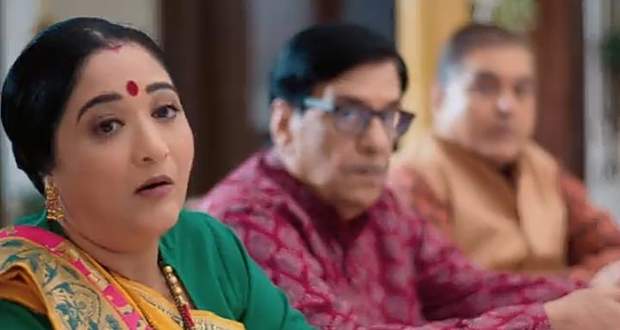 Today's Anupama 21 September 2021 episode starts with Anuj telling Anupama that he will be the one to learn new things from her and tells her to not worry about anything other than work.

Elsewhere, Leela is making Modak's with Kavya while Kavya instigates her against Anupama and Vanraj backs her.

Anuj offers Anupama to drop her home while she reveals that she came there in a car while recalling how she learned it.

He tells her that she can come to their site in a car and bids her goodbye after getting her number.

Later, the Shah family plans to decorate the Karkhana while Samar suggests inviting Anuj which angers Vanraj and they get into an argument.

Elsewhere, Anupama meets up with Devika and informs her how she got influenced by her words wnd said yes to Anuj's partnership offer.

Meanwhile, GK convinces Anuj to let him invite the Shah family for the Ganapati festival while Anupama tells Devika that she hopes her happiness doesn't go away.

Vanraj tells the family that no one will attend Anuj's Ganpati festival and Hasmukh says that he will go while Anupama returns home.

Leela blames her for the fights and leaves while Hasmukh encourages Anupama.

Vanraj is about to call Anuj while Kavya stops him and tells him to fight with Anupama and not Anuj.

Anuj tells GK that Vanraj doesn't live him and Anupama working together and promises himself to help Anupama if her work gets affected due to Vanraj.