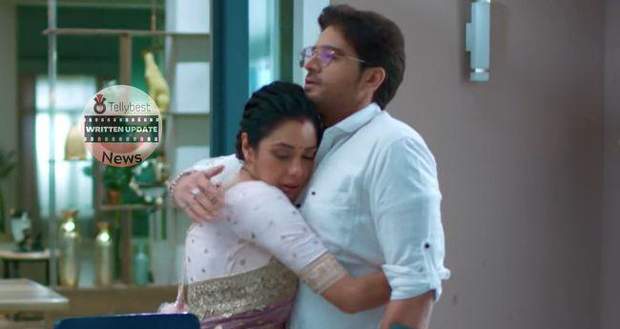 Today's Anupama 21st September 2022 episode starts with Anuj giving strength to Anupama and saying that he knows it was very difficult for a mother who can't see a broken toy of her child to see her child broken from the strings of a family.

Meanwhile, Anupama expresses her deep sorrow as she is now tired of fighting and she doesn't want to even know about the exterior world by being close in one room so that she can live for herself too.

However, Anupama inquires about Anuj's breakfast and again gets back to household chores as a part of every woman's life.

Anuj wonders and says that only a woman has the power to grind herself daily as if they stop the whole universe's function can stop.

At the same time, at Shah's house, Kinjal wakes up to find Vanraj and other family members around her baby Arya feeding her milk.

Vanraj asks Kinjal to begin her day with a fresh start and don't let past incidents' bad shadows fall on a new day.

Leela again makes her think about Arya making Vanraj and Kavya turn furious at her.

Kinjal asks for Anupama and turns a little upset knowing she left, Leela asks to call her but she denies it and says even Anupama has her family's responsibilities.

At Kapadia's house, Ankush and Barkha come and asks for Kinjal's condition from Anupama and pass unusual comments regarding Paritosh and Kinjal's wedding while Anuj tries to shut them off.

Anuj reacts to this and suggests Anupama not help others anymore till they don't ask for it.

Pakhi and Adhik discuss about betrayal and even though he thinks this type of Toshu's behavior is expanded in India whereas it is normal in western countries while Pakhi is shocked to hear Adhik's point of view.

Kavya says to Leela that she has done some of the kitchen chores and now she is ready to go to the office but Leela again taunts to which Dolly tries to shut her.

Everyone is stunned watching Kinjal standing with her bag.

Meanwhile, Rakhi is driving and worried about Kinjal as last night she was upset with her and didn't even talk.

Kinjal tries to convince Leela to let her go as she can't live like this seeing pity for her in everyone's eyes and she cannot tolerate living in this house as her brain will explode thinking about this all.

Kinjal urges Vanraj to let her go while Kavya asks her to drop but simultaneously Rakhi arrives and asks Kinjal about his going shocking everyone.

Kavya answers and says that Kinjal might need a break so is planning to spend some days at her home.

Kinjal asks Rakhi to drop her at Anupama's house making everyone in shock.

On asking for a reason she says she doesn't want Anupama to divide herself between two houses so she decides to go to Kapadia's as she only needs Anupama and no one else.

Meanwhile, Leela asks Rakhi to make Kinjal understand but she says she has no words as her daughter doesn't wish to come to her mother's house.

© Copyright tellybest.com, 2020, 2021. All Rights Reserved. Unauthorized use and/or duplication of any material from tellybest.com without written permission is strictly prohibited.
Cached Saved on: Friday 30th of September 2022 09:58:51 PMCached Disp on: Saturday 1st of October 2022 12:40:59 AM