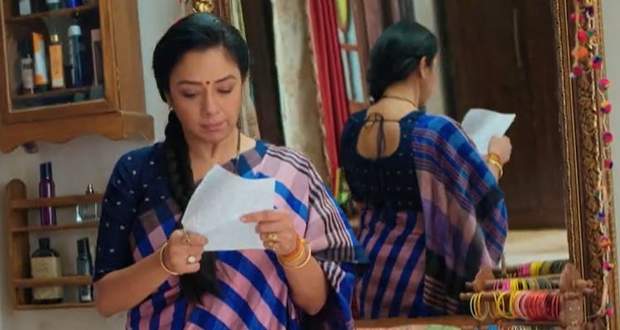 Today's Anupama 22 April 2021 episode starts with Anupama reading the note which informs her that Vanraj has run away to get more time for their divorce.

Kavya is unable to call Vanraj and decides to go to the Shah house but Nandani stops her.

She manages to convince her and leaves while Nandani looks on.

Meanwhile, Anupama reveals to Samar, Dolly and Pakhi that Vanraj has run away and that she is tired of managing everything.

She has an emotional breakdown and asks why does she have to do everything alone.

She cries saying that Kavya will blame her for Vanraj's disappearance and says that they will have to find him at any cost.

She tells everyone to try to find him while Kavya arrives there and enquires about Vanraj.

Anupama informs Kavya that Vanraj has run away which causes her to have a mental breakdown.

She starts blaming Anupama and says that it is their plan while Anupama stops her and says that the divorce will happen at any cost.

Dolly gives Kavya the letter and tells her that it is a clear indication that he doesn't want to marry her.

© Copyright tellybest.com, 2020, 2021. All Rights Reserved. Unauthorized use and/or duplication of any material from tellybest.com without written permission is strictly prohibited.
Cached Saved on: Tuesday 8th of June 2021 06:51:24 AMCached Disp on: Wednesday 16th of June 2021 12:05:01 AM