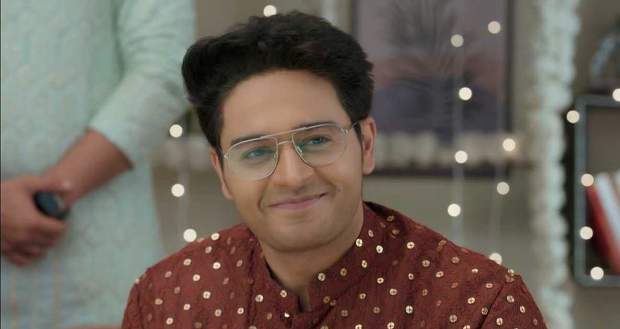 Today's Anupama 22nd April 2022 episode starts with Pakhi, Toshu, Samar, and Kinjal discussing the function and appreciating the qualities of Anuj as a perfect life partner.

Vanraj passes by the corridor and stops in front of that room as he hears his children complimenting Anuj instead of him.

On noticing Vanraj, Kinjal asks the reason to which Vanraj replies that he came to get the charger.

After Vanraj leaves, Samar raises the question of Vanraj sulking and Kinjal explains that it is natural for him to feel inferior as he might think that Anuj is snatching away his family from him.

Meanwhile, Hasmukh prepares a manicure session for Anupama himself that surprises Anupama completely.

In the middle of the session, Hasmukh gets dizzy again which makes Anupama worry about his health.

Leela comes to stop Hasmukh from servicing Anupama which she thinks is the duty of a servant but gets shunned by Hasmukh.

Night falls and Kinjal and Anupama walk outside for Anuj to take Anupama with him for the surprise.

Anuj arrives and offers his greetings to Anupama and Kinjal and takes Anupama with him in the taxi after bidding Kinjal goodbye.

As they arrive at their destination, Anuj leads Anupama the way as he blindfolded her to give the surprise directly.

Anupama opens her blindfold after entering a place and remains stunned to see them standing inside a jewelry shop while the employees showered flower petals on them.

Leading Anupama to the counter, Anuj asks Anupama to choose the engagement ring of her choice and lets her go through the pieces.

However, Anupama runs out of the shop after remembering her past when she had to accept whatever ring her in-laws selected for her.

At the same time, Pakhi, Samar, Toshu, and Kinjal show Hasmukh the ring that they have selected for Anuj and keep it at the temple in the house.

Elsewhere, Anupama sincerely thanks Anuj for fulfilling her dream of buying jewelry for herself without looking out for other people’s preferences.

© Copyright tellybest.com, 2020, 2021. All Rights Reserved. Unauthorized use and/or duplication of any material from tellybest.com without written permission is strictly prohibited.
Cached Saved on: Sunday 2nd of October 2022 12:01:43 AM