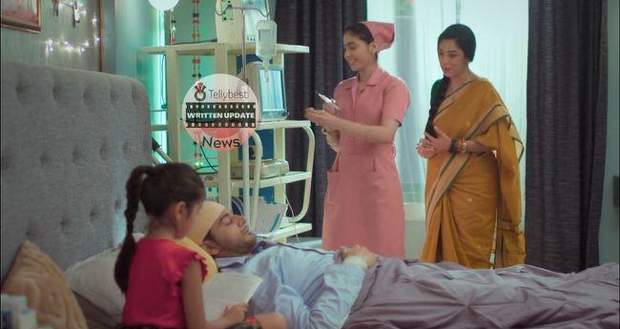 Today's Anupama 22nd August 2022 episode starts with the doctor comforting Anupama that the opening of Anuj’s eyes is a positive sign.

She thanks lord Krishna for the same and asks him if she can take Anuj in a wheelchair, and the doctor replies positively.

On the other hand, Pakhi tells Adhik on a video call that Vanraj desires to visit Anuj for Janmashtmi and also tells him that she did not like the way Adhik talked to the Shahs in the hospital.

This infuriates Adhik and he tells himself to be more careful in front of Pakhi next time.

Following this, Choti Anu comes to Anupama dressed as Krishna, and Anupama appreciates her.

Choti asks Anupama if the Shahs are coming for the festival but disposes of her convincing once Anupama gets silent.

After she leaves, Barkha comes and taunts Anupama to call them to which Anupama warns her to take care that her Janmashtami does not become Durgashtami.

Later, Barkha and Ankush think to themselves that soon Anupama’s swag would be gone as they see Anupama handling business calls.

Meanwhile, the Shahs are decorating their house when they listen to Anupama’s voice note to wish them.

However, Vanraj keeps thinking to himself that he has to visit Anuj.

He is about to leave the house when he sees police standing at the door.

The family gets scared but the police ask for Sunderlal Shah and they take a breath of relief that it is not Vanraj.

In the Kapadia’s house, Anupama trims, changes Anuj’s clothes, cuts his nails, dresses him up as Kanha, and also makes him sit in a wheelchair.

She appreciates his look and prays to not let anyone cast an evil eye on him.

Meanwhile, Vanraj is emotionally non-reacting to the happiness at home while everyone decides to play a game in which Ba cheats and wins.

However, Kavya sees Vanraj looking towards the door and gets the idea that he wants to visit Anuj.

Barkha and Ankush stamp Ankush’s name on the document and get happy with the revenge they are about to take.

Later, Anupama gives Anuj a magnet instead of a flute to rest on his hand and tells him that his Radha will get ready and look so beautiful that Anuj would stand up and hug her.

She goes to get ready while Anuj’s mouth starts twitching into a little smile.