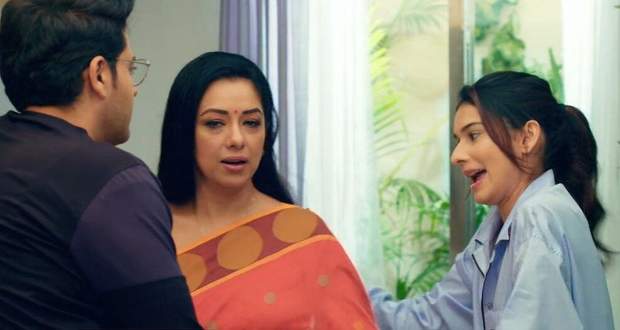 Today's Anupama 22 December 2021 episode starts with Anuj continuing his story of the painful incident in which he lost his parents and Malvika was in a coma for 14 days.
After Malvika regained her senses, Anuj felt an emptiness in her eyes, as if she is silently depicting Anuj as the culprit.
Anuj always used to live in anxiety as Malvika started to travel to unknown places without him knowing anything about her.
Anuj starts blaming himself and apologizes to Anupama, breaking down into tears making Anupama cry too with him.
Meanwhile, Samar drops Nandini at her house while Nandini asks Samar to give Vanraj a second chance as his father.
On one hand, where Anupama was crying seeing Anuj break down, on the other hand, Kavya was shedding tears remembering the past and divorce.
Anupama sees Malvika standing at the door with Jignesh and gets shocked.
Malvika comes and straightaway asks Anupama if she loves Anuj, making both Anupama and Anuj speechless.
Malvika then tries to pull some pranks and cracks into laughter relieving everyone of the heavy atmosphere.
She tells Anupama to return to their house and Anupama agrees.
As Anupama goes to bring her things, Malvika expresses her disliking of the fact that Anuj told an outsider the sensitive family matters.
The next day, Anupama starts preparing breakfast when Anuj comes and joins her.
He apologizes for Malvika’s childish behavior and tells her that he already knows Anupama doesn’t have feelings for him.
Anupama gets irritated hearing Anuj’s words as to how can he decide for her feelings.
Later, Malvika comes and says she will cook the breakfast for all, pushing Anupama away from the kitchen counter.

Upcoming Anupama episode updates: Malvika argues with Anuj and leaves the house, Anuj and Anupama search for Malvika while she shows up at Vanraj's house.

© Copyright tellybest.com, 2020, 2021. All Rights Reserved. Unauthorized use and/or duplication of any material from tellybest.com without written permission is strictly prohibited.
Cached Saved on: Thursday 20th of January 2022 11:15:55 AMCached Disp on: Friday 21st of January 2022 04:42:01 PM