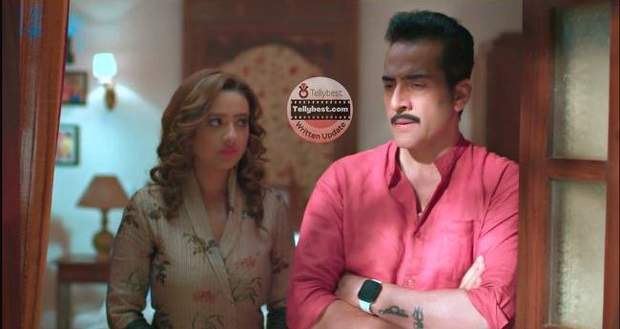 Today's Anupama 22nd December 2022 episode starts with Leela praising Anupama for taking Pakhi’s responsibility and assuring everyone that they do not need to think about anything anymore.

Pakhi says that she will do housework and study at the same time as she wants a peaceful life with Adhik.

Vanraj and Toshu encourage Pakhi to take responsibility while Pakhi says that she and Adhik will mend the problems between them.

However, Barkha interrupts Pakhi’s monologue and says that life is not a joke which changes in seconds.

Barkha asks Pakhi how she is so sure that she will work out everything between her and Adhik without any issues.

As Vanraj asks Barkha what she is trying to say, Anuj interrupts and announces that he will tell everyone the problem.

Anuj tells Pakhi he does not trust her a bit as everyone knows she changes colors within seconds.

Anuj asks Pakhi what guarantee there is that she will stand by her present words even after 10-15 days.

Explaining to Pakhi that the matter between her and Adhik is very serious, Anuj states that their dynamic cannot change overnight magically.

Vanraj asks Anuj what his point is to which Anuj says that it takes time for a person to change themselves.

Anuj tells Pakhi that her and Adhik’s relationship reached its peak and it will take time for it to return to normal.

Anupama agrees with Anuj and says that they need to warn Pakhi before she takes another wrong step and spoils her future.

Adhik says that he and Pakhi cannot stay together currently as he needs some time to work on himself.

Anuj makes an important announcement and says that Anupama will not be present all the time to aid Pakhi like a child.

Saying that Pakhi is a grown adult and can take her own decisions, Anuj makes it clear that Anupama will not lead her through every move in her life.

After Anuj and Anupama come back, Anuj sits with Anupama and says that she does not need to be with Pakhi every moment.

Anuj says that everyone in the Shah family behaves nicely with Anupama according to their convenience while she takes all the responsibility to be the problem solver.

Anuj tries to make Anupama understand that she is overly nice to everyone which makes others take advantage of her.

Anupama listens silently as Anuj says that she needs to say no sometimes to people as she is a human too and has her limits.

Anu comes there and complains to Anupama about leaving her alone in the house and asks Anupama to take her with her next time.

As Anu says that she wants one of them to participate in her annual function, Anuj says that Anupama will accompany her.

After Anu leaves, Anuj tells Anupama that he wants Anu to be nice to everyone but not overly nice like Anupama.

Anuj wishes Anu to become Anupama’s shadow but not Anupama cause in the end she will be left alone.

Anupama asks Anuj if he thinks that she does not love Anu as much as her other children, to which Anuj says that Anu might think like that.

Making Anupama realize how the Shah family is always present between them, Anuj asks her to spend more time with Anu.

© Copyright tellybest.com, 2022, 2023. All Rights Reserved. Unauthorized use and/or duplication of any material from tellybest.com without written permission is strictly prohibited.
Cached Saved on: Wednesday 25th of January 2023 10:15:56 AMCached Disp on: Thursday 9th of February 2023 04:11:39 AM