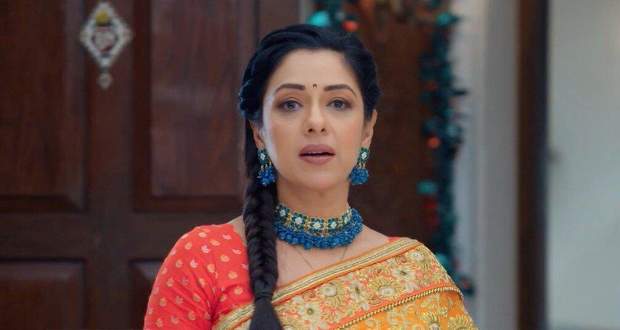 Today's Anupama 22 January 2022 episode starts with Anupama explaining to Pakhi that she should set her goal in life first then run to persuade it.

Anupama explains if she always gets influenced by her friends’ choices then she will not be able to get anything of her own in her life.

At the same time, Anupama promises that once Pakhi decides on what she is going to take for her life, Anupama will work her blood and sweat to take Pakhi up there.

Hasmukh closes the matter then and there and asks everyone to proceed to doing puja and celebrating Sankranti.

Seeing Anupama on the balcony, Vanraj appears there and accuses her of always going against him to prove him wrong.

Anupama makes it clear to Vanraj that she did all the things for Pakhi’s welfare, not to prove him wrong.

Vanraj asks Anupama why she asked Malvika to stop talking while Anupama does not object to Anuj intruding.

Anupama tells Vanraj that Anuj always knows when to talk but Malvika is a simpleton so she has to teach her the correct ways.

The family does the puja together, instead of passing the aarti thali to Anupama, he gives it to Malvika who herself hands it over to Anupama.

Later, Anupama gives correct life advice to Malvika, Samar, and Pakhi while feeding them sweets herself, Vanraj continues to glare at Anupama.

The game starts, everyone chooses their chits which are either blank or have their partner’s names.

Vanraj gets a blank chit but replaces it with the one with Malvika’s name on it, Anupama notices this and gets shocked.

Anuj gets Anupama’s name, all partners prepare to compete in kite flying.

Upcoming Anupama episode updates: Anupama-Anuj and Vanraj-Malvika compete against each other in kite flying, Kavya appears and cuts Vanraj's kite with scissors.