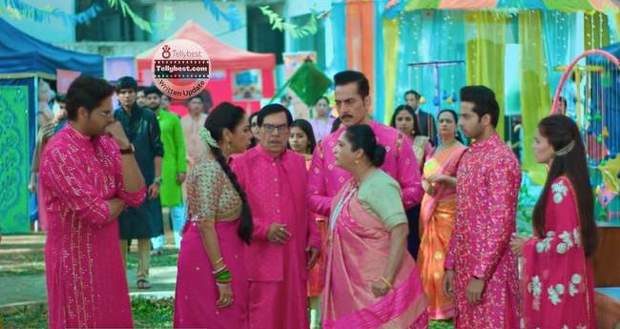 Today's Anupama 22nd January 2023 episode starts with Mohit telling Kavya and others that there is a product launch and the person who has organized everything will arrive soon.

Kavya asks Mohit why he is so hyped about this person to which Mohit responds that she is the type of person to turn people into hyped ones.

The woman comes to Kavya and Mohit and shakes hands with them while Kavya compliments her personality.

Anupama stops as she passes by and waves hello to Kavya while Maaya faces in the opposite direction.

Anupama and Kavya talk to each other in signals and wish each other the best of luck for the event.

Vanraj, Leela, and Hasmukh drink tea and Leela watches both Samar-Dimple and Anuj-Anupama-Anu enjoying the event with smiles.

Leela says that Anupama is happy herself after lighting fire in their lives which makes Hasmukh angry and he leaves.

Later, Samar and Dimple are together when Samar tells Dimple that she is looking pretty.

Dimple makes a shocked face but Samar tells her to relax as he just gave her a sweet compliment.

Samar shows Dimple his kite with a heart drawn on it and says that he does not know how to say poetic words but wants to convey his feelings.

However, Dimple stops Samar from uttering his words and says that she is not ready to move on yet.

Samar says that he knows that Dimple is not ready but says that his dance in the event will be his question and if Dimple dances with him, that will be her answer.

Meanwhile, Vanraj and Anuj bump into each other while two people give them pamphlets of Paritosh Shah as a property dealer & use Anuj's name.

Vanraj tells the people that Anuj is standing in front of them which scares them and they leave from there.

Vanraj apologizes to Anuj from Paritosh’s side and assures him that he will not let Toshu use his name for such purposes.

Leela asks Samar and Dimple how dare they try to get closer after she has already warned them that she will never allow Dimple in their house.

Samar asks Leela why she is getting so aggressive to which Leela answers that Dimple is very cunning in nature.

Anupama asks Leela to hold onto her horses as she can not just utter such cruel words against Dimple.

Samar tells Anupama and Leela that he likes Dimple to which Anupama says that it is Samar and Dimple’s matter if feelings are mutual.

Leela asks Anupama why she is speaking now when she was silent in Toshu’s matter that was being discussed.

Anupama says that Leela can be mad at Dimple but she cannot insult her like that in public which offends Leela.

Anuj says it is enough and asks Anupama to come with him while Anupama says that she will always be with Samar as he is her son and cannot make a wrong decision.

Vanraj asks Leela to come with him but Leela asks Anupama to look after her husband and daughter as anything can happen at any time.

The function starts and Anu says that she, Anuj, and Anupama will perform and takes them to the stage.