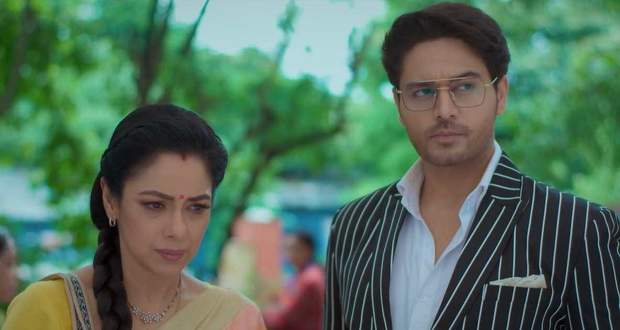 Anupama tells Vanraj that Kinjal’s accident did not happen purposefully but Leela says what if Kinjal got hurt during it.

Little Anu breaks the tension in Shah’s House, announcing she is now friends with the baby in Kinjal’s tummy.

Little Anu also pretends to do magic on Leela’s legs, asking Leela if she feels better.

Leela smiles a little and nods her head.

After Anupama leaves, Vanraj says that the Shahs should not expect anything from Anupama now because she has changed.

According to Vanraj, she has all the time in the world to be a mother and a wife but not a grandmother.

Vanraj asks Kavya to take Kinjal to the doctor from now onwards but Leela volunteers to do everything because she cannot expect "Maida-Ki-Katori" (Kavya) to be responsible.

Vanraj breaks into a smile, saying his Ba can do everything while Leela proclaims even after a woman has been burdened in marital life, she is still able to stand straight if any responsibility is placed on her.

Meanwhile, Adhik and Barkha try to impress Pakhi with designer clothes and bags.

Pakhi tries a blue cocktail dress while Adhik and Barkha hype her up to do a catwalk in it.

Meanwhile, Anupama lays her head in her mother’s lap, saying her only wish is to fulfill Anuj’s dreams and aspirations.

However, as soon as Anupama says this, Anuj’s photograph drops down from the wall, cracking Anupama and Anuj’s wedding photo ominously.

On the other hand, Barkha tells Pakhi that since Anupama can now afford a luxurious life, Pakhi does not have to live a middle-class life.

Barkha tries to play with Pakhi’s mind and even asks her to go to the US along with Adhik to study.

The thought excites Pakhi but before she can say anything in return, Anupama arrives back with Anu.

© Copyright tellybest.com, 2022, 2023. All Rights Reserved. Unauthorized use and/or duplication of any material from tellybest.com without written permission is strictly prohibited.
Cached Saved on: Wednesday 25th of January 2023 11:22:04 PMCached Disp on: Sunday 5th of February 2023 01:25:14 PM