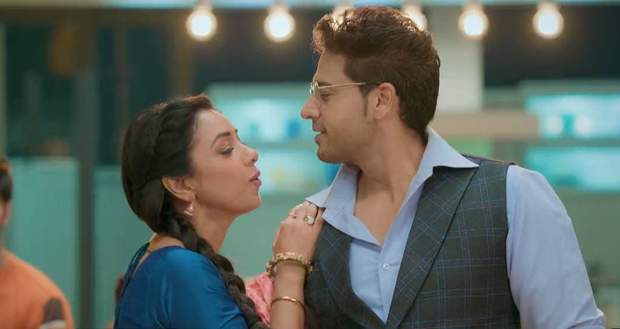 When Ankush asks why Anupama and Kinjal are still crying, Anuj says that one mother is crying from fear and one from guilt as mothers always blame themselves for anything that might hurt their children.

Saying this, Anuj tries to calm both of them down.

As Anupama apologises, Vanraj raises his voice and shouts at Anupama, dismissing her apology.

Seeing this, Anuj comes to defend her, saying that no one will talk to Anupama in such a tone.

Vanraj retaliates by saying that he does not need Anuj to tell him how to speak.

Anuj says he understands Vanraj’s anger but Vanraj shouts back at him saying that outsiders cannot understand his pain right now.

Vanraj accuses Anupama saying that as long as she was a middle-class daughter-in-law, she never let anything like this happen.

Anuj says if Anupama has tolerated Vanraj’s misbehaviour so many times then why can’t he accept a small mistake that she made, that too unintentionally, but Vanraj keeps blaming her.

Anuj says we all accept it was a big mistake but it’s not Anupama’s fault.

As Anupama tries to take Kinjal into the room, Vanraj stops her saying that he won’t let Kinjal and his kids stay even a minute more at this house, but Kinjal requests to stay back with Anupama.

Vanraj demands that Kinjal should be sent home safely in the morning tomorrow.

Driving back to their house, Hasmukh explains to Samar that Vanraj is not sad, he is afraid of the new people coming and stealing everyone he loves.

Kinjal rests on the bed, while Barkha comes in and apologises to her.

In the living room, Anuj asks Anupama if she’s okay and she lays her head on his chest as she sobs.

Barkha says that Kinjal should not have come here while being heavily pregnant and should be taken back to her own home.

Anuj agrees to say that if something would have gone wrong, we don’t know what Vanraj could have done and asks Anupama to send Kinjal back.

Barkha says it's unacceptable for Vanraj to scream at Anupama like this and his behaviour is not right.

In the Shah house, Vanraj screams at Pakhi saying that he told her to not go there while Pakhi tries to defend Anupama.