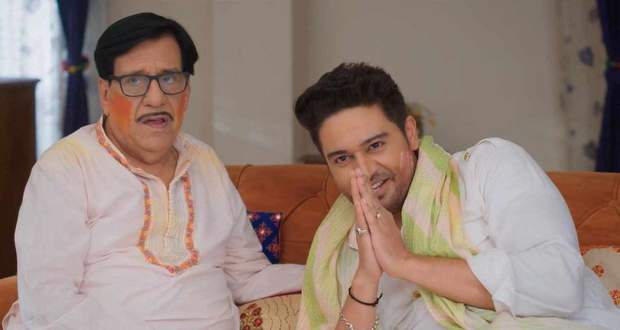 Today's Anupama 22nd March 2022 episode starts with Pakhi conversing with her friends on a video call when one of them informs about the second marriage of one of their friends.

Pakhi hears the news and gets anxious about Anupama’s marriage matter.

As Anupama comes to call her, Pakhi expresses her concern regarding her mother’s marriage and asks her not to marry Anuj.

Vanraj enters after Pakhi leaves and continues to taunt Anupama with his repeated suggestions of Anupama not marrying Anuj.

Later, Anupama thinks about the opinions of all the family members and stiffens in anxiety while Anuj approaches her quietly.

Anuj apologizes to Anupama for announcing everything but Anupama refuses to talk to him and asks him to leave her alone.

Hearing this, Anuj stops Anupama by holding onto her saree and tries to know the matter going on in the Shah family.

Silent tears escape from Anupama’s eyes, seeing that Anuj understands the matter and tells her that they are together in this.

However, Anupama retracts her hand from his grip and asks Anuj to leave from there.

Seeing this, Anuj says that he will not let Anupama go away from him ever but if Anupama decides to abandon him then he will silently leave.

Anupama stares at Anuj with anxious eyes as he tells her that she has to forget him like in the past if they separate from each other.

Later, as Samar, Dolly, and Hasmukh worry about Anupama’s whereabouts, she enters the house with a gloomy face.

Hasmukh calls Anuj to find out the matter and gets upset about seeing him crying and worrying about Anupama’s decision.

Anuj tells himself that if Anupama leaves him then his whole life will come to a pause.