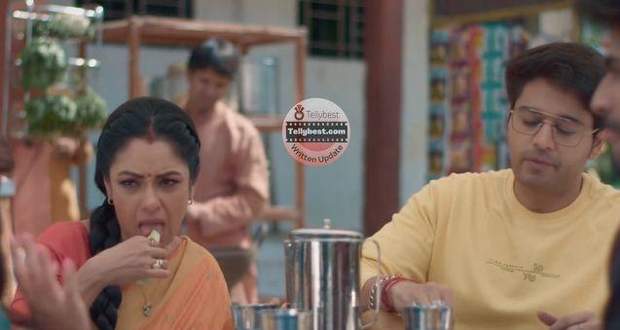 Anupama asks that goon angrily to remove that picture.

However, the goon arrogantly says that he is not interested in an auntie’s picture and if she insists he will take Anupama’s picture as well.

Anupama covers her face defensively and the goon says that he will have to apply a lot of filters to make that picture beautiful.

Dimple angrily tells the goon that he should apply those filters on his mother’s face.

The goon get out of his chair and starts to misbehave with them by pushing Dimple and Anupama.

Anupama screams Anuj’s name, and he rushes in and saves Anupama as she is about to fall to the ground.

Anuj takes things to his hand and starts beating the goon while people gather around and pulls them apart.

Anuj decides to leave and goes to the car to stop any more drama from being created.

In the car, Dimple apologizes to the duo for all the trouble that has been caused.

Anupama assures Dimple that it isn’t her fault.

She further says that if a boy is taught half of what a girl is taught none of this stuff would happen.

Dimple and Nirmit decide to stop at an empty road that will take them to the bus stop.

Anupama gets sad as they leave and she gives them a marriage present, they click some pictures and go on their way.

On the way, Anupama feels uneasy and Anuj thinks it's motion sickness.

However, on the other hand, Dimple and Nirmit are being followed by the goons and the goons decide to take action and stop the car blocking their way.

Meanwhile, Anupama finds Dimple’s charger in her car and tells Anuj to drive back to the bus stop.

The goons get out of their jeep while Dimple and Nirmit try to run away but the goons catch them and mistreat Dimple and beat Nirmit.

At the same time, Anuj and Anupama arrive at the scene and they fight off the goons.

Anupama is highly agitated as she angrily beats the goon with a bag full of coins.

They carry Nirmit to the car but one of the goon gets up and beats both Anuj and Anupama with a log and take Dimple away with force.

Anuj, Anupama, and Nirmit stay unconscious in the middle of the road while Dimple keeps shouting for help.

Anupama tries to fight her unconsciousness but fails as the darkness surround her.