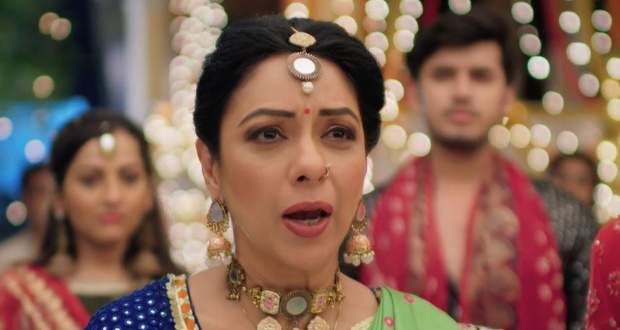 However, Vanraj is anxious to see them enjoying their dance, and Baa is enraged to see Anupama fearlessly following her heart.

Further, winners are announced towards the end of the Garba dance competition.

Kavya wins the best dresser award, Baa and Babuji win the best senior dancer award, and in the end, the most awaited title, the Best Jodi award is backed by Anuj and Anupama.

Baa is asked to hand over the award to the couple, which winds up the rage.

Anupama thanks Anuj for helping her through everything. She seems extremely happy to have won the contest, which leads her to clear a major part of her loan.

However, the members at the event start blabbering nonsense behind the ears of Vanraj and Baa, emphasizing the chemistry between the two.

People start yelling at Baa, ask her to forbid this nonsense, and if not, they clearly warn her of throwing the family out of the community.

Baa outbursts with anger, insults Anuj, asks him to get lost and stay away from the community.

Devika interferes and tries standing up for Anuj, but, Baa doesn’t think twice before insulting her. She blames Devika for turning Anupama into a divorce.

Everyone seems unstoppable when to everyone’s surprise, Anupama speaks up against everyone’s odd thinking for the first time in her life.