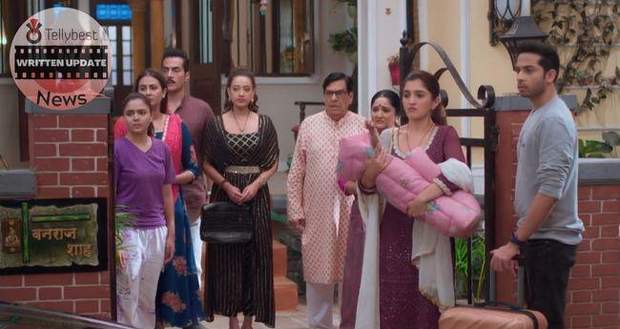 Kinjal says that a woman is not considered modern for doing the job and dominating men rather in a true sense she is modern for saying the truth and taking a stand for other women.

Leela doesn’t allow Kinjal to go to Anupama while Kinjal speaks in favor of Anupama and asks Leela with which relation and right she asked Anupama for so many favors.

Leela says she is her mother but Kavya taunts her and says she has never made Anupama feel this as she only remembers her while facing any family members.

Meanwhile, at Kapadia's, Anupama and Anuj are busy doing some paperwork and hear a baby cry.

They are stunned to see Kinjal, Vanraj, and Kavya standing at the door with a bag and Arya.

Barkha is in no good hope seeing this.

On the other hand, Samar and Paritosh are discussing Kinjal not picking up his call while Samar tries to make Paritosh realize his mistake but he denies it.

He asks Samar a favor to make him see Arya and Kinjal once on a video call.

Samar on this tells him that Kinjal has left Shah’s house to live with Anupama which makes Paritosh go speechless.

Paritosh predicts that Anupama would have asked Kinjal to come to her house just to provoke her against him.

Meanwhile, Vanraj apologizes to Anupama and tells her about Kinjal’s insistence to come here while Anuj through his eyes tells her to support Kinjal.

However, Anuj on watching Vanraj being emotional about leaving Arya tells him to come here whenever he wants to meet Arya or Kinjal.

Barkha and Ankush are irritated by seeing this family love while Vanraj assures Kinjal by saying when we get hurt we need a mother before any cure.

Meanwhile, Paritosh is enraged and shouts and says the goddess Anupama just needs a devotee and Kinjal is the one.

Samar and Paritosh argue about his mistakes and Paritosh threaten him with his death taking a knife in his hand.

In the Shah House, Leela takes out her anger by tearing clothes in frustration.

Kavya turns emotional and cries for Arya as she is desperate to give her motherly love to her and urges Vanraj to bring Arya back.

In the Kapadia Mansion, Anupama and Kinjal share a sweet bonding as a mother-daughter duo.

She tells Anupama that it is okay to be busy with her work while she gets Paritosh’s call and cuts it.

Later, Anupama thanks Anuj and he says that he loves this Anupama who manages everything.

He asks Anupama to drop Anu at art class and then goes to the office while he assures her to take care of Kinjal and Arya.

They both decide to face these circumstances together.

She tries to advise her asking to divorce Paritosh, shocking Kinjal to the core.

© Copyright tellybest.com, 2020, 2021. All Rights Reserved. Unauthorized use and/or duplication of any material from tellybest.com without written permission is strictly prohibited.
Cached Saved on: Friday 30th of September 2022 06:51:12 PMCached Disp on: Saturday 1st of October 2022 01:48:04 AM