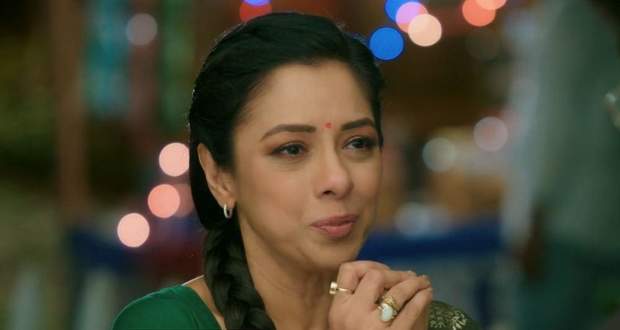 Today's Anupama 23rd April 2022 episode starts with Anuj telling Anupama that it is her right to receive all the good things in the world and asking her not to demean herself.

Anuj further compliments Anupama by telling her that no matter how big of a diamond he buys for her, it will be dull in front of her.

Going inside the shop, Anuj and Anupama begin to go through the rings and finally selected one.

Anuj asks Anupama to buy a more costly one but Anupama remains contented with the one she chose.

On getting free stuff from the shop, Anupama gets happy which makes Anuj adore her with affection.

Meanwhile, in the house, Hasmukh and all the others sit and discuss the division of duties between them on the engagement the next day.

Leela confirms that her mother has got tickets and will crash Anuj and Anupama’s engagement, causing major drama.

Anupama comes back from her shopping with Anuj and flaunts her free stuff to others making them excited.

Vanraj asks where Kavya was the whole day, to which Kavya replies that she was busy with some important work.

All the family members compliment Anupama after she shows them the picture of the diamond ring that Anuj got for her.

At night, both Anuj and Anupama run their imagination of love and get happy themselves thinking about the next day.

The next day starts and Anupama visits the temple to thank the god for letting her meet with Anuj.

Anuj leaves his house to meet with Anupama at the temple while Vanraj appears beside Anupama in the temple.

Vanraj tells Anupama that he wants to talk to her about something important.